The Ordeal of Fanny Kelly, Captive of the Sioux

The plight of American pioneer women captured by local tribes has long sparked my imagination. The struggle to survive in a foreign culture amid trials of endurance whisper stories to me. I finally gave into the temptation to write one of them in Cheyenne Sunrise, a western historical romance set in a time of unrest in the Wild West. My research for this story led me to an account by Fanny Kelly of her capture and imprisonment by the Sioux. Since the Cheyenne and Sioux were allied tribes, I based many of the events in Cheyenne Sunrise on Fanny’s experiences.


Born Fanny Wiggins in 1845, she lived in present-day Canada until her father, James Wiggins, relocated his family to Kansas in 1856. Unfortunately, Fanny’s father died of cholera during the journey. Fanny and the rest of her family settled in Geneva, Kansas. When she came of age, Fanny married Josiah S. Kelly, a man who hoped to bolster his poor health with a change in climate. He set out for Montana Territory in the spring of 1864 with Fanny, Mary Hurley, their seven-year-old adopted daughter and Fanny’s niece, plus two ‘colored’ servants, Franklin and Andy. A Methodist preacher named Mr. Sharp soon joined their party. Another couple, William and Sarah Larimer with their eight-year-old son, Frank, left a larger wagon train to travel with them. Two other men, Gardner Wakefied and Noah Taylor, fell in with the Kellys also. The company preferred the faster speed a smaller party could make. They paid a tragic price for this decision.

After reaching Wyoming’s Little Box Elder Creek on July 12th, they were approached by a large band of perhaps 250 Oglala Sioux warriors led by the war chief, Ottawa. Terrified, they did their best to appease the warriors, doling out their supplies on request and even preparing a meal for the warriors. The Sioux engaged in increasingly rowdy behavior, then attacked the party while several of the men, including Mr. Kelly, were away from the wagons. They killed Mr. Sharp, Noah Taylor, and Franklin outright and wounded Gardner Wakefield and William Larimer. The other men escaped. Another wagon train that happened on the scene raced away, but warriors pursued them and killed one their number. The remaining Sioux looted the five wagons, then forced Fanny, Sarah, and the two children.to ride off with them.

Fearful of what their captors planned, Fanny explained to little Mary that she would drop her to the ground, and that she must run back along the trail until she found someone to help her. With the volume of travelers on the Oregon Trail at the time, this seemed a logical plan to her. Mary agreed, and Fanny dropped her, then was immediately seized by the desire to join her. She attempted to follow but was recaptured while several warriors rode off after Mary.

Josiah Kelly and the servant, Andy, along with the wagon party that had chanced upon the site of the massacre, sought the protection of a large wagon train miles distant. They later returned to the scene and found William Larimer with an arrow in his arm and Wakefield pierced by three arrows but alive. They found Mary Hurley’s scalped and mutilated body several days later. After burying her, the party traveled to Deer Creek Station to inform the army garrison of the incident.

Sarah Larimer managed to escape with her son. She and Frank reunited with William at Deer Creek Station. After William’s recovery, the family returned to Kansas.

Sarah’s escape had a profound impact on Fanny, for it served to isolate her all the more. She fell under the protection of the old chief, but angered him by losing his pipe. Overloaded with things to carry and unaware of its importance, she had dropped and broken the pipe. The old chief announced her punishment. She would be tied to the back of an unbroken horse and used for target practice by the warriors. Certain she would die, she opened her pouch and distributed banknotes to her captors. This charmed them so much that she escaped her planned fate. Divine intervention, as Fanny freely acknowledges, appears to have saved her.

I based an incident in Cheyenne Sunrise on this story and borrowed details of scenery from Fanny’s journey to the Sioux village for my book.

Efforts to free Fanny were finally successful, and she rejoined her husband, who never tired in his pursuit of a way to free her. The Kellys returned to Kansas, where an outbreak of cholera claimed Josiah’s life in July 1867, shortly before Fanny gave birth to their child.

Researching a historical novel can be heartbreaking. I found Fanny’s account of her captivity among the Sioux hard to read, especially the parts about little Mary. Despite everything, Fanny’s abiding faith in the Lord inspired my own. 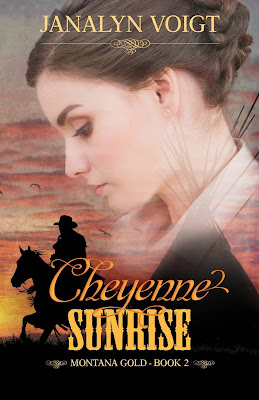 Romantic Times: "Janalyn Voigt is a talented writer and brings to life the long-ago wild west with vivid descriptions of the landscape."

Young Irish widow Bry Brennan doesn’t want another husband to break her spirit. She ignores her fascination with Nick Laramie, her wagon train's handsome trail guide. Nick lives in an uneasy truce between the settlers and his mother’s tribe without fully fitting in among either. With no intention of dragging a woman into his troubles, he stifles his yearning for Bry.

The perilous journey throws the two together, leaving Bry no choice but to trust Nick with her life. Can she also trust him with her heart?

Purchase Cheyenne Sunrise
Posted by Janalyn Voigt, escape into creative worlds of fiction. at 12:01 AM