Meet Me At the Fair
By Martha Rogers


In 1904, one of the largest expositions and fairs in the United States took place in St. Louis, Missouri to commemorate the 1803 Louisiana Purchase. One other city, Kansas City was considered when plans began as early as 1898. Both cities were central location within the territory purchased.

An initial budget was set at $5 million was committed by the city of St. Louis by the sale of city bonds. In 1899, the Missouri state legislature authorized the exhibition to be held there. An extra $5 million came through private donations from citizens and businesses all over Missouri. The final five million came as funds earmarked for the exhibition as part of a congressional appropriations bill passed in May of 1900. President William McKinley actively supported the exposition.

Initially, the fair was to be held in 1903 as the centennial celebration, but the opening was delayed until April 30, 1904 and remained open until December 1 of that year. 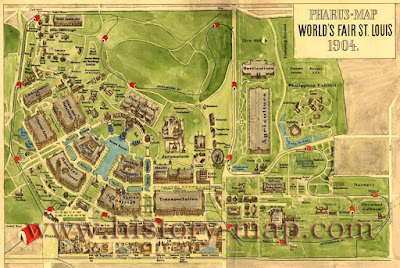 Washington University. Over 1,500 buildings connected by 75 miles of roads and walkways made up the fair grounds. Visitors quickly discovered they could not possibly see it all in a day or two. Most visits ended up lasting a week if the visitor wanted to see everything.

While Kessler created the master design for the fair, others were enlisted to design various buildings and other structures. Architect Isaac S. Taylor was named Chairman of the Architectural Commission and Director of Works for the fair. Other architects included Emmanuel Louis Masqueray who designed a number of buildings and Paul Pelz who designed the Place of Machinery. According to claims in a 1923 edition of The Colored Citizen, the majority of the work done building it was by African Americans. Some even contributed to the architecture designs but were not credited.

Most of the buildings were designed and constructed to be temporary, and some were moved to other locations at the end of the fair. The Palace of Fine Art became the home of the St. Louis Art Museum, and the Administration Building is now Brookings Hall on the campus of Washington University. The entrance to the Creation Exhibit on the Pike was dismantled and rebuilt as Coney Island’s Dreamland amusement park, and the huge bird cage in the Saint Louis Zoological Park dates to the fair. Here are two of the beautiful buildings erected. The bottom one is the Palace of Electricity as see at night. 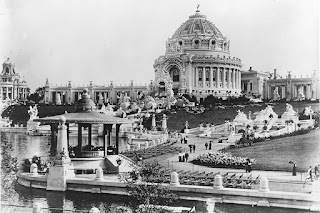 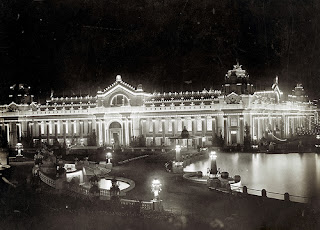 One of the most interesting ones was the wireless tower which was purchased by Charles N. Rix, a banker from Hot Springs, Arkansas after the fair. He had it moved to the summit of Hot Springs Mountain. My family visited Hot Springs in 1953 and went to the top of that tower. Sadly, it deteriorated to the point it had to be demolished in 1975 because of its instability. 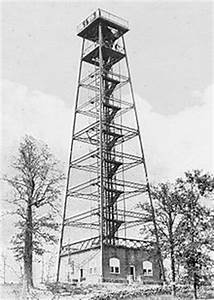 The grounds were laid out in such a way that no matter where you were, you had a beautiful view. One of the favorite spots was the lagoon where couples or families could have a ride on a gondola. Here are two pictures of the lagoon, one from each end. 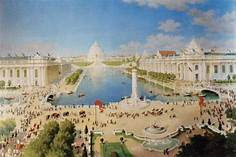 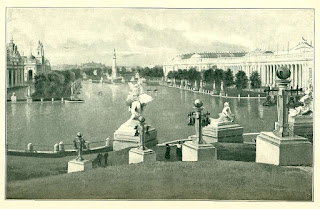 The fair brought in many innovations that later became an integral part of life in America. Among them were a wireless telephone, and early Fax machine, x-ray machines, infant incubators, electric streetcars, automobiles, air transportation, and various food products such as cotton candy and peanut butter.
Palace of Electricity

Transportation around the fair was available. One of them being these chairs that were pushed by students. 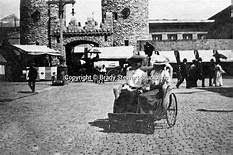 In this blog, I have shown some of the beautiful buildings and architecture that made up the fair grounds. Next month I’ll continue with more influences and wonders of this great fair.

Every year, as I was growing up in Dallas, Texas, I visited the State Fair of Texas in October. My favorite exhibit at the fair was the building where they displayed new inventions and innovations for the future. My favorite activity was on the midway with rides and Funnel Cakes and Corn Dogs.

What's your favorite part of a fair or carnival?