A House in a Box


Where modular homes were built in sections at a factory, a kit house had every individual piece of lumber shipped, already numbered and cut to fit its particular place in the house. This eliminated the laborious need for measuring and cutting in an age before power tools existed. Kit home manufacturers claimed their packaged homes saved customer 30 to 40 percent over traditional building methods. 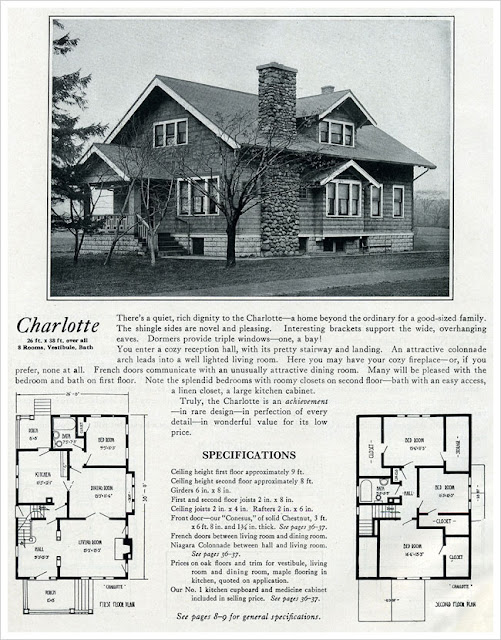 Lumber was pre-cut to length, guaranteed to fit, ready to nail, and labeled for easy assembly. Floor joists and bridging, sub-flooring, finished flooring, studs, rafters, sheathing, clapboards, shingles, stucco, plaster or drywall, columns, railings, doors and windows, hardware, nails, and paint for two exterior coats were included in the order. Plumbing, electrical, and heating systems were available for an additional charge. Although the lumber and hardware were standardized, the designs were not and buyers were encouraged to personalize their order. Many models had two or three floor plans, while the exterior could be clapboards, shingles, stucco, or framed for brick. Walls, windows, and doors could be moved, added or eliminated. Porches, sunrooms, flower boxes, trellises, balconies, built-in cabinets, and a variety of door and sash patterns were available at an additional charge.
Once the materials arrived, a customer would arrange for a local carpenter or contractor to assemble the house on a piece of land owned by the customer; or a customer who was handy with tools might assemble all or part of the house himself in several weeks or a few months' time. The resulting houses were indistinguishable in quality and appearance from those built by traditional methods, yet they were often significantly cheaper because of the savings on carpenters' and contractors' wages, and the cost of high-quality lumber bought from a large kit house company often was lower than at the local lumber yard. Some companies such as Sears, Montgomery Ward, Gordon-Van Tine, and Harris Brothers, offered cash discounts and generous mortgage terms.
Can you imagine going to a store and picking your next home from a catalog or the excitement of the arrival of a kit house by rail box car would create for a small town? I’d bet it was something that was talked about for a long time.


Join seven Texas Rangers on the hunt for a menacing gang, who run straight into romances with women who foil their plans for both the job and their futures.

My novella in the Seven Brides for Seven Texas Rangers is Partners in Crime, and here's what it's about:

Micah McCullough, a Texas Ranger working undercover in the Markham gang, is tasked with guarding Laurel Underwood, a silversmith, who was kidnapped to create plates for printing counterfeit money. Laurel knows she doesn’t have the expertise. Her only option is to stall and seek escape. What will the outlaws do when they learn her secret? 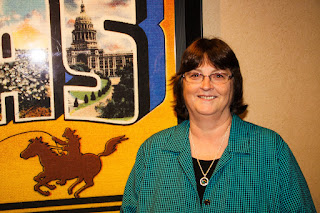 Bestselling author Vickie McDonough grew up wanting to marry a rancher, but instead, she married a computer geek who is scared of horses. She now lives out her dreams penning romance stories about ranchers, cowboys, lawmen, and others living in the Old West. Vickie is an award-winning author of more than 45 published books and novellas, with over 1.5 million copies sold. Song of the Prairie won the 2015 Inspirational Readers Choice Award. Gabriel’s Atonement, book 1 in the Land Rush Dreams series, placed second in the 2016 Will Rogers Medallion Award. Vickie has recently stepped into independent publishing.