Don't Blink...You Might Miss It: Ghost Towns of Wyoming & Montana

Last month, I continued a summer series on ghost towns with a few gems in the Centennial State of Colorado. If you missed that post, you can read it here: https://www.hhhistory.com/2019/06/ghost-towns-of-colorado.html.

Only two more months and four more states, two each month. There are far too many to cover the entire US, so I hope you'll share some towns in YOUR state that were once thriving, but have now become ghost towns you can visit, or have been completed abandoned. This month, we'll travel to the north and focus on the states of Wyoming and Montana.

Because of the mountains and mining for both silver and gold, prospectors, vigilantes, pioneers, and all sorts of explorers headed west during a short period in our nation's history. As a result, a wealth of towns had population booms and explosions. Unfortunately, a good majority of them also saw a decline as rapidly as they grew. Towns in Wyoming and Montana are no different than their neighboring states and territories.

Wyoming was the first state to grant women the right to vote, and it also boasts the first female judge in the nation. It is also home to a wealth of restored ghost towns to visit and enjoy. 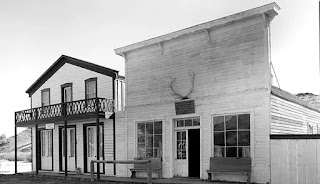 Located just north of the Oregon Trail, this one of the most authentic and complete historic sites in the West. Wyoming’s City of Gold is surrounded by mining claims, several of which are still being worked today. This restored area contains 20 original structures authentically restored and a Gold Mining Interpretive Center, complete with an original working stamp mill.

This town boomed with the discovery of gold in the late 1860s and became one of the busiest cities in the region. Approximately 2,000 miners lived in ramshackle housing around the city. By 1872, work at the Clarissa Mine dwindled, and most of the miners moved on, leaving behind the town they created. Visit this deserted settlement and partake in original pastimes such as panning for gold in Willow Creek and ordering a sarsaparilla soda at the Smith-Sherlock General Store. 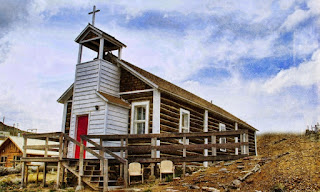 No, this is not the gambling town on the east coast along the Jersey Shore. However, due to the general disposition of the miners and settlers who came to this town, it did have its fair share of gambling and other activities.

Not too far from South Pass City, this booming mining town had nearly 2,000 miners, many of whom were vacationers or part-time prospectors, so there were many options for leisure and entertainment, including a brewery, dance hall, and opera house. Many original log homes and structures still remain, including a church and general store. Be sure to stop by the Atlantic City Mercantile, which is listed on the National Register of Historic Places, to grab a drink and a bite to eat.

This ghost town is situated on U.S. Forest Service land along the Wood River, near the town of Meeteetse and at the head of the spectacular Wood River Valley, surrounded by breathtaking mountain peaks that top 12,000 feet. The boom for this town occurred in the 1890s, but it began to deteriorate in 1907 when a massive snowstorm caused an avalanche, killing three people. In the 1930s, the land became part of the Double Dee Guest Ranch, a place visited by Amelia Earhart and her husband, George Putnam. A cabin was under construction for Earhart when she disappeared during her around-the-world flight in 1937, and it was never completed. You can view the remnants of her cabin, which are visible about a mile from Kirwin, as well as an old hotel, small log structures, and mining machinery at the abandoned settlement. 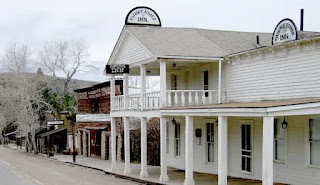 This is probably the West’s best-preserved gold mining town from the 1860s. Visitors can walk the same boardwalks desperate vigilantes, pioneers, and prospectors once roamed, and guests are transported to a time when rowdy miners mingled in saloons. You can also tour more than 100 historic buildings (complete with artifacts and furnishings), ride a fully-refurbished 1910 steam locomotive and a stagecoach, attend live theater, shop in gift and specialty shops, and enjoy fine dining, old fashioned baked goods, and candies. Sounds like a fantastic little excursion and day trip to me! 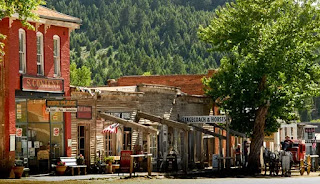 This last town for today is just 1.5 miles away from Virginia City, and it has 14 historic buildings original to the site, plus a collection of more than 100 historic buildings that were saved from locations all over Montana and moved here. The majority of these buildings came from other towns that were abandoned and no longer exist. Visit the Nevada City Music Hall—its collection of historic music machines, gaviolis and player pianos make up the largest public music machine collection in the world. You can also spend time panning for gold at Alder Gulch.

* Are there any ghost towns in the state where YOU live? If so, share the state and the name of the town(s).

* Which one of the ghost towns above tickles your fancy the most and makes you want to visit?

She lives with her husband and fellow author, Stuart Vaughn Stockton, along with their two children and three dogs in Colorado. She has sold twenty (21) books so far and is represented by Tamela Hancock Murray of the Steve Laube Agency. You can find her on Facebook, Twitter, GoodReads, and LinkedIn
Posted by Tiffany Amber Stockton at 1:00 AM