Today we have guest host, Margery Kisby Warder, joining us with a fascinating story of a woman whom you probably never heard of.

Anna Laura Hill dedicated her adult years to improving the lives of homeless and orphaned children. She with other children’s workers from crowded cities placed over a quarter of a million homeless children into rural families to offer them a better life. At least 100,000 were from New York City. Hill’s requirement for each placement was that new homes provide stability as well as food and education. Children and agents on trains transporting these precious abandoned souls became known as “The Orphan Train” movement.

In notes for one of Agent Hill’s presentations, Anna explained the Children’s Aid Society’s founder, Charles Loring Brace, followed God’s leading after witnessing the immigrant city’s streets teeming with ill-kept and unsheltered orphans. He saw them begging for food or engaged in thievery. By 1853, his institution began caring for the street and slum children, hoping to teach employable skills to the older children. CAS also started operating a farm in rural New York, coinciding with placing thousands of children on farms in the Midwest. The next year, the first train took over forty children to find new homes.

At age twenty-six, Miss Hill left her teaching position to join CAS staff in 1903. After four years caring for the children brought to the institutions, she became an agent who oversaw the placement process for many of those riding the “Orphan Train.” Her first trip was to Nebraska where she helped place fifteen children. By 1913, Kansas had become her primary address as she became the superintendent of placements for that state. Kansans took in 5,000 children. By 1929 when the placement program ended, Miss Hill had made over 150 trips with “her children.” The National Orphan Train Complex in Concordia, Kansas, has a museum and depot with more information about Miss Hill and the riders who settled into homes in Kansas. 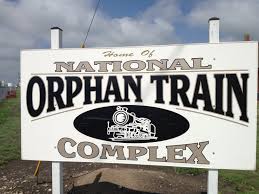 Prior to placing the children, Miss Hill and other agents sought out respected businessmen and ministers to organize and help oversee the placement operation before the children’s arrival. Midwestern editors cooperated. Headlines proclaimed, “HOMES FOR CHILDREN WANTED” and articles asked, “Do You Want a Child?” Details told how interested individuals and couples could interview with the committee and when crowds could gather to see the children needing homes. After the train pulled away, editors would report how many children were placed, their names and ages, and who took the children in.

The Brown County World (Hiawatha, Kansas) for February 25, 1915, reported that Miss Anna Laura Hill had arrived and secured committees for placing children in good homes. Those interested in taking home a child could submit their names. The children would be at the Life and Annuity hall at 3 p.m. on February 26th. “Miss Hill will be glad to explain under what conditions the children are placed in the homes and what the home does for them after that.”

When the train left New York City, each child had at least two sets of clothes. Each time the train reached a receiving community, the children would be readied in their best outfits for their appearance. Children gave their names, then sang or recited something or told of their interests so onlookers could begin picking which children to take home. Later as adults, train riders would report how they felt when some prospective person would poke and examine them to see if they were healthy enough to work.

An Ottawa (Kansas) June 15, 1915 article states “CROWD TO SEE ORPHANS” followed by “Ten Homeless Children Were Brought Here Today.” In that trainload, the youngest child was nine months and the oldest was eight years. Most newspapers proclaimed, likely due to prejudice on the part of agents like Miss Hill, that the children were particularly attractive and unusually bright. In fairness, children were carefully selected for the trains heading to rural America.

Long after the placement, Miss Hill continued correspondence with each of “her children.” She sent birthday greetings and letters to see how they were doing. She also took time to encourage the children to take advantage of opportunities to build a good life.

On the National Orphan Train Complex website, a letter from Anna Laura Hill to her mother describes a harrowing trip into Nebraska during a flood. She and the children sat for hours while workers tried to strengthen bridges so the train could venture on across. She remarked that men who had not talked much about God in a long time were talking about Him during this ordeal.

My two weeks doing research at NOTC in Concordia (Kansas) was well spent. I’d encourage readers to use this resource to gather information about our country’s history. I hope to eventually pay a greater tribute to Agent Hill, a woman who deserves to be brought out from the shadows to receive the respect she earned. 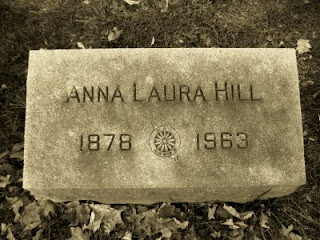 Anna Laura Hill, born in Pennsylvania on November 17, 1878, died on August 17, 1963. She never married; her placements were her children. After her CAS work ended, she remained active around Elmira, New York, where she is buried. No doubt her life’s work touched hearts wherever she spoke, but none so deeply as the happy families she helped establish.

*The website for the National Orphan Train Complex is: https://orphantraindepot.org 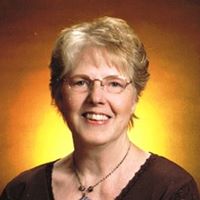 Author/speaker Margery Kisby Warder lives in Florida with her husband and a rescue dog who strongly believes every guest comes to spoil her. As Midwestern transplants, Warders now find it easier to visit family members. Looking out at palm trees is a plus, too. Warders live their faith in their senior community and through their church ministries, but no longer as the pastor/wife team they were for decades. Margery still enjoys speaking and writing. You can find her books on Amazon and follower her on Facebook. 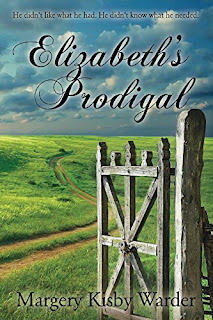 Did Albert’s father really die in the Civil War? Is Albert ready to move into manhood and be on his own at age 13? When he sneaks off to Ann Arbor, a series of humorous adventures begin shaping his character in ways no one could have predicted. Elizabeth’s Prodigal makes readers laugh out loud and wipe tears as they cheer on a young man searching for who he was created to be.
Posted by Vickie McDonough at 12:30 AM