The Chuckwagon--More Than Just a Mobile Kitchen

I’ve talked the last couple of months about cattle drives and the hot, dirty, and exhausting work that goes on in such an endeavor. But have you ever given much thought to how the crew of a cattle drive might have eaten along the trail? It was in the cattle owner’s best interest to keep his crew healthy and happy. A content cowboy was far more likely to protect the herd, so the boss made sure the most basic need of his men was met—with a belly full of good food!

In order to feed the crew of ten to twenty men, the outfit’s cook (often affectionately known as “Cookie”) drove a chuckwagon—a mobile kitchen—along with the herd. The chuckwagon was a fairly simple wagon, covered with a canvas cover, and improved with several upgrades. The “chuck box” was a wooden cabinet bolted to the back of the wagon. This handy invention, with its many drawers and shelves which held ingredients, spices, small utensils, and with its flat cover which folded down to create a workspace for the cook, was the brainchild of Charles Goodnight—a Texas Ranger turned cattleman. Beneath the chuck box, a “boot” held the larger items like the cast iron dutch oven and other large cooking pieces. A canvas tarpaulin slung under the wagon was called the “possum belly” and held their fuel, typically wood or cow chips, collected along the trail. A large barrel was adhered to the side to hold water as they traveled. 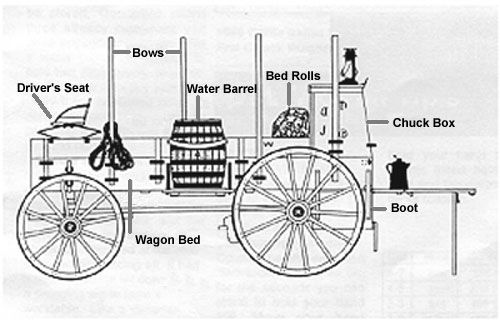 The interior of the chuckwagon carried all the staples—flour, salt, sugar, baking powder, baking soda, beans, rice, cornmeal, sourdough, coffee, and syrup. The main meat for meals was beef, though the cowboys would hunt and fish to add variety to their stores. And, of course, sowbelly—a type of salt pork. This was of utmost importance since everything Cookie made was fried in bacon grease. (Another thing the interior of a chuckwagon often carried was the bedrolls of the crew. They needed to travel light while driving the cattle each day, so their bedrolls were tossed into the chuckwagon as they broke camp. In smaller cattle crews, this was the case. If it was a larger crew, a second wagon just for the bedrolls and personal belongings would be provided).

Keeping the crew fed and the herd traveling at a decent pace each day required Cookie to either rise several hours earlier than the rest of the crew—or arrive at the next campsite hours before the herd. The cook would untie the canvas cover from atop the wagon and stretch it out from the last bow (the curved ribs that gave the covered wagon’s top its rounded shape) at the back of the wagon to shade his cooking area. He’d use wooden poles to prop up the other side of the tarp. Nearby, he’d build a nice fire to cook over, then put down the flat cover of the chuck box for a work table, and he’d set about his cooking.

Meals would include a meat main dish—most often a steak, but could also be a pot roast, ribs, or stew. Add to that beans (a.k.a. frijoles) cooked in a variety of ways, biscuits, stewed fruit or a fruit pie, and coffee to wash it all down. While the meals might not be fancy, they were hearty and filling, and after long hours in the saddle eating trail dust, the men were thankful for the simple yet tasty meals.

A set of well-known, if unwritten, rules governed the chuckwagon, cookfire, and meals.
·     A cowboy always approached the camp from downwind. This prevented dust from blowing into the food.
·     No one brought their horses too close to the wagon—for the same reason.
·     The cookfire was not the place to gather for warmth. It was for cooking only.
·     The chuckwagon’s flat workspace was not to be used as anyone’s dining table. That’s what a lap was for!
·     No one touched the cooking utensils unless and until Cookie said he could.
·     If you were dishing your food, you never set the lid of a pot or any other utensil on the ground. Again, this would keep dirt and dust from the food.
·     No one was allowed to take the last piece of anything until the whole crew had eaten their fill.
·     While refilling his coffee, if someone shouted “Man at the pot!”, the cowboy was expected to refill any other cup that was extended to him.
·     At the end of the meal, each man would scrape his scraps into the “squirrel can” and place his dirty plate and utensils into the “wreck pan” for washing.

The cook on a cattle drive wasn’t just any old hand. No siree! He was a highly respected member of the crew. In most cases, he was a seasoned cowhand with plenty of knowledge on handling the herd, navigating the trail, and ranching in general. The cook was second in command and answered only to the trail boss. As stated above, he rose hours earlier than the crew and often worked well past the final meal as he cleaned dishes and got everything put away. In addition to his duties with the food, the cook also served as the crew’s barber, banker, mediator for any interpersonal tiffs and fights, and most importantly, doctor. Cookie could administer whatever procedures the cowboys might need—from stitching minor cuts to setting broken bones. He’d keep the medicinal whiskey, a small amount of morphine or laudanum, and whatever other herbal remedies he might have for what ails you. So between the medical uses, the food, the money-handling, and the wealth of knowledge and experience of the cook, the chuckwagon was truly more than just a mobile kitchen. It was the center of life on the trail.

It’s Your Turn: While chuckwagons are mostly a thing of the past, there are some western dude ranches that still do chuckwagon dinners during a weeklong stay at their guest ranch. Have you ever eaten a chuckwagon dinner? If so, tell me about it. If not, does this type of experience sound interesting to you? Why or why not? Were there any facts or details about historic chuckwagons that surprised you?

Jennifer Uhlarik discovered the western genre as a pre-teen when she swiped the only “horse” book she found on her older brother’s bookshelf. A new love was born. Across the next ten years, she devoured Louis L’Amour westerns and fell in love with the genre. In college at the University of Tampa, she began penning her own story of the Old West. Armed with a B.A. in writing, she has finaled and won in numerous writing competitions, and been on the ECPA best-seller list numerous times. In addition to writing, she has held jobs as a private business owner, a schoolteacher, a marketing director, and her favorite—a full-time homemaker. Jennifer is active in American Christian Fiction Writers, Women Writing the West, and is a lifetime member of the Florida Writers Association. She lives near Tampa, Florida, with her husband, college-aged son, and four fur children.

Taming the west—one heart at a time.
Becoming Brave by Jennifer Uhlarik
When Coy Whittaker stumbles upon a grisly scene littered with bodies, he wants nothing more than to get his boss’s cattle out of Indian Territory. But when a bloodstained Aimee Kaplan draws down on him, his plans—and his heart—screech to a halt.