What is a Commonplace book? I heard this term a few months back and was fascinated by the concept.


Commonplace books were popular during the Renaissance and the 19th century in modern Europe. Reading and writing went hand in hand. They read to better themselves and to find truths. They did this by writing out passages from the books they read.

“The ancients followed the same course as ourselves when commencing their meditations, laid up a great store of instances and particulars, and digested them under topics and titles in their commonplace books.” Sir Francis Bacon, 1620

Robert Burns’s introduction in his commonplace book.
I took a stab at transcribing this page. I never would have been able to attempt it if not for my post in February titled 27th Letter of the Alphabet where I highlighted some of the letters we used to have and no longer use.

“Escaminu(?) N. 30th Aug 1797(?)
Observations, hints, songs, scraps of poetry v__(?) by Robert Burns, a man who had little art in money-making, and still less in keeping it; but was, however, a man of some sense, a great deal of honesty, and unbounded good-will to every creature, rational or irrational. As he was but little indebted to scholastic education and bred at a plough-tail, his performances must be strongly tinctured with his unpolished, rustic way of life; but as I believe, they are really his own, it may be some entertainment to a curious observer of human nature to see how a plough-man thinks and feels, under the pressure of love, ambition, anxiety, grief with the like cares and passions, which, however diversified by the modes, and manners of life operate pretty much alike I believe, in all the species.”

I don’t promise this translation is 100% accurate, but I think I got close. Some of the words were a real challenge to decipher.

I love this line, "...a man who had little art in money-making, and still less in keeping it..." It tells so much about him, including his honesty.

Why have a commonplace book?
—So you can learn to think better.
—Writing down the jumbled thoughts in your brain helps to make sense of them.
—To spark creativity. What inspires has direct results on your creativity. The brain can connect vastly different things when they are in close proximity to each other. Say you wrote down a recipe that you have never been able to get to turn out right and on the next page you have a proposed floor plan for rearranging furniture in a room. Maybe the recipe gives you a new way to think of combining pieces in the room to work better together. Or by rearranging the floor plan, you realize that you need to combine the recipe ingredients in a different order for a better outcome. Without having those things in close proximity to each other those connections wouldn’t have been made. Success with the recipe that had always evaded you and the room would never be quite right. Our brain is an amazing organ.
—So that you don’t have to memorize and recall from memory all those tidbits that sparked inside you.


How is this different from a “journal”?
A journal or diary is more of an account of the happenings of the day.

I’m going to start a commonplace book very soon. My first one will be my learning experience. I have sort of done commonplace book type things throughout my life, but the quotes I wrote down were scattered about, so I could say that it was more of an UNcommon NONbook method of writing down and then losing them. Not very effective.

I recently copied down a C.S. Lewis quote I liked that I will be putting my commonplace book when I get it started.
"Isn't it funny how day by day nothing changes, but when we look back everything is different." C.S. Lewis

Do you have a commonplace book? If so, can you share something from it? 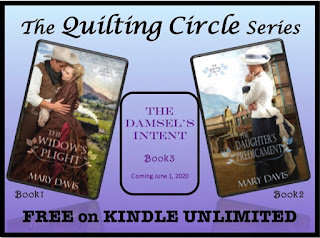 MARY DAVIS s a bestselling, award-winning novelist of over two dozen titles in both historical and contemporary themes. Her 2018 titles include; "Holly and Ivy" in A Bouquet of Brides Collection, Courting Her Amish Heart, The Widow’s Plight, Courting Her Secret Heart , “Zola’s Cross-Country Adventure” in The MISSAdventure Brides Collection , and Courting Her Prodigal Heart . 2019 titles include The Daughter's Predicament and "Bygones" in Thimbles and Threads. She is a member of ACFW and active in critique groups.
Mary lives in the Pacific Northwest with her husband of over thirty-four years and two cats. She has three adult children and two incredibly adorable grandchildren. Find her online at: