The Ladies are Packing Books

From 1935 until 1943, women on horses delivered books to remote areas in the Appalachian Mountains because of a waning budget due to the Great Depression, The American Library Association figured at the time only one-third of Americans had decent access to public libraries. The Pack Horse Libraries were a great substitute. 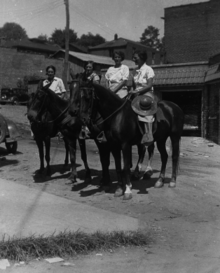 Many living in the rural areas of Eastern Kentucky had no access to books at all and were illiterate, though many wanted to learn to read for the economic advantages. Enter the “Pack Horse librarians” or book ladies.

Besides getting reading materials into the boonies, the project employed two hundred—mostly women—when jobs were at a premium. Many of the Pack Horse librarians were the sole breadwinner in their homes.

A lady named May Stafford started the project in 1913 with the support of John C.C. Mayo who was a local coal baron, but he died the following year, ending it before it hardly got going.

But a lady who worked with the women’s and professional projects at the Works Progress Administration (WPA), Elizabeth Fullerton, decided to resurrect the idea when a minister of Lesley County offered the books from his community center to the project in 1934. on the condition that WPA would fund the ladies.

So the first “Pack Horse Library” was established in 1935 under FERA (Federal Emergency Relief Administration) then WPA took it over the next year, 1936. A year later, eight packhorse librarians were sending riders out on their routes.

However, there was no funding allocated for the books they carried. All those had to be donated by the communities, and they also had to supply a place to store the books and all the supplies the riders and their supervisors needed.

Supervisors, or head librarians, improvised using what might be thrown away for their card catalog files or to repair damaged books. They bent old license plates to become bookends.

Each ‘library’ had four to ten book carriers who rode the horses into the mountains to deliver—and sometimes read—the stories to their public. The head librarians held “conferences” to meet with their riders monthly.

Carriers supplied their own horse or mule which they often had to lead over the rough, steep parts of their route. Some had deep rivers or creeks to cross and their feet would get wet. One lady said her feet froze to the stirrups. One lady hiked her eighteen-mile route on foot after her horse died.
Children love for the book ladies to come—usually twice in a month. Robinson Crusoe and Mark Twain’s stories were popular. Adults often requested the Bible and also read current events or historical stories as well as biographies.

Women liked books on health and parenting as well as illustrated home magazines. They would share recipes and quilt patterns, writing their own down in a binder to share with their neighbors, creating over two hundred books to be passed around.

The riding librarians might cover more than a hundred miles every week, carting around a hundred books in their packs. Their books were so popular and well-loved that patrons would walk long distances to meet the Park Horse librarians and exchange books.

When funding ended in 1943, so did the Pack Horse Libraries. Communities tried to keep them going, but couldn’t make a go of it. In the 1950s, the bookmobiles started deliveries again.