The Pitfalls and Profits of Researching Fiction--and a Giveaway

As an author, some stories are easy to write. They flow from my mind out onto the computer screen like a rushing waterfall. Others…not so much. My newest release, Lady and the Tramps, part of the Courting Calamity novella collection, falls in the second category—and one of the main reasons this one became so difficult is because of a little line on a map.

The novella focuses, in part, on a train robbery. So I needed to set the story close to a railroad track. I scoured California maps from 1874 to find the exact right location to set my story, and I thought I’d found it in San Luis Obispo. There was a line on various maps, clearly marked “Southern Pacific Branch Line,” indicating a train ran close enough to that town to fit my needs. In the northern portions of the map, that line had hash marks across it, but further south, the hash marks stopped, and it was a simple straight line. However, it was clearly marked as a branch line, so I started writing with that in mind.

Weeks later, with three-quarters of the story written and only fourteen days until my deadline, I did a quick Google search for another minor detail. That’s when the bottom dropped out. In researching that other little factoid, I read a single sentence that stated the railroad finally made it to the area I’d set my story in—twelve years after my story took place! The “branch line” on the 1874 map was a proposed location for the railroad—not the actual railroad line. That explained why the hash marks stopped further north. They’d only built the line to the point where the hash marks ran out--Soledad, California. MAJOR PITFALL! 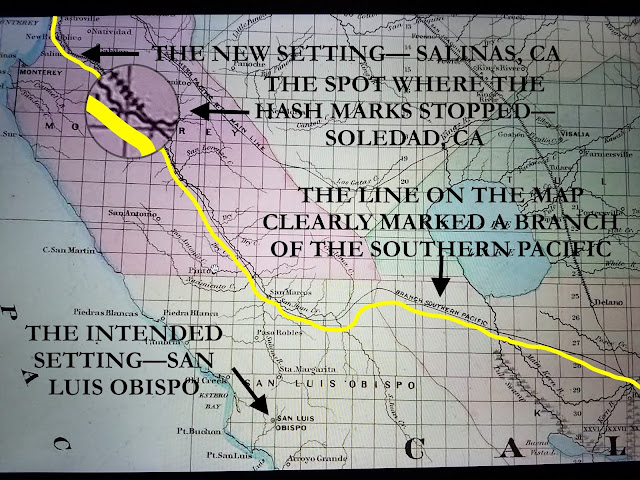 So…did I simply move the story timeline forward by twelve years? Not without throwing a wrench in other historical details. Did I address the timeline error with an author’s note stating I knew the train didn’t reach that area until more than a decade later? If it had been a matter of a few months, I would have…but I could not, in good conscience, choose that solution when the time discrepancy was so large! So my only option was to reset the story further to the north—and revamp the plot to fit the new locale. Let me tell you, it took work and a very gracious extension to my deadline from my publisher.

But here’s where things turn around. In researching new locations for the story, I discovered the very interesting town of Salinas, California. It fit my needs perfectly, and it was a joy to read up on the area in the process. So here’s a bit about this fascinating place.

Just eighteen miles east of Monterey, California, the area was originally settled by Native Americans, then became part of the Mission system under Spanish control. When California shifted into Mexico’s hands, the area was divided into smaller “ranchos.” Then California was ceded to the United States in 1848.

At this point, Rancho Las Salinas became a crossroads where two prominent stagecoach lines passed. One traveled between Monterey and San Juan Bautista, and the other between San Francisco and Los Angeles. But in 1854, six years after California became part of the United States, some local American settlers decided to put a post office at the crossroads. Two years after that, the Half Way House—an inn for weary travelers—was built. The inn was quickly expanded into a full hotel, and it wasn’t long after that a mercantile, stable, and blacksmith shop were added. Thus, the town of Salinas was born.

During the 1850s and 1860s, the greater area around Salinas was used for running cattle, but by the late l860s, the focus shifted to planting. Everything from mustard and potatoes to grain crops like wheat and barley grew well in the area. When the county courthouse was moved from Monterey to Salinas, and the Southern Pacific Railroad agreed to route their upcoming branch line through the growing city, they put themselves on the map—literally and figuratively.

Salinas grew from there, becoming one of the most modern cities of its size in California by the mid-1880s. It boasted a water company, a gas company, three newspapers, and electric lighting—all in addition to the multiple churches, shops, schools, hotels, and residences.

Here are a few interesting facts about Salinas, California, that I learned in my research:

·      In those early days, Salinas had the second largest “Chinatown” in California, only eclipsed by San Francisco.
·      Chinese Immigrants were largely responsible for the success of the crops in Salinas in the early days since they drained the marshes in the area and built the irrigation systems that allowed the crops to thrive.
·      Because of the great growing conditions—and the entrepreneurial mindset of Claus Spreckles—a sugar beet processing factory was built near Salinas and helped to form the industry for that crop nationwide.
·       By 1898, Spreckles brought two hundred Japanese men to the area to work in his sugar beet processing plant, developing quite a large and prosperous immigrant community in the thriving town.
·      The Japanese workers introduced celery, broccoli, and other crops into the repertoire of the area farmers, adding to the grains, root vegetables, grapes, and beet crops already grown there.
·      On February 27, 1902, author John Steinbeck was born in Salinas, California. Steinbeck went on to write many American classics such a The Grapes of Wrath and Of Mice and Men. Salinas is the setting for his novel, East of Eden. 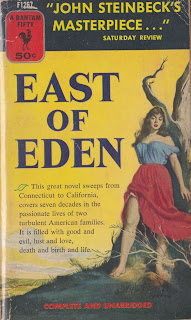 ·      The California Rodeo began in 1911 in Salinas—and still continues today as one of the premier rodeo events in the nation.
·      During World War I, the Salinas Valley produced many crops to feed the Allied Armies in Europe.
·      During the 1920s, Salinas moved away from sugar beet crops to lettuce and artichokes, which are the mainstays of the farming industry of the area today. Salinas is now affectionately known as the "Salad Bowl of the World."
·      In 1924, Salinas, California was one of the wealthiest cities in America, per capita.
·      During World War II, the California Rodeo grounds in Salinas became one of the temporary intake areas for the Japanese-Americans who were sent to internment camps due to President Franklin D. Roosevelt’s Executive Order 9066. (If you’re unfamiliar with this piece of American history, I invite you to read some excellent HHH posts by Kiersti Giron here and Nancy J. Farrier here and here).

That line on the map caused me quite a headache for a while…but in the long run, I’m glad it did. The history geek in me is glad to have been forced to research Salinas and learn just what an impact this town had on so many things.

It’s Your Turn: What pitfall have you experienced in your life or job that ended up being a profit to you in the end? And/or…what part of the history of Salinas that I presented here did you find most interesting? Leave your answer with your email address, and you’ll be entered in the drawing for a signed paperback copy of Courting Calamity, which includes my story, Lady and the Tramps. (US residents only).

Heroes Needed for Four Damsels in Distress
Despite the determination to be strong and independent, four women of bygone days are in need of a hero.

Lady and the Tramps by Jennifer Uhlarik
California, 1874
When outlaws steal a deed from Mattie Welling, her dreams for her eight orphan charges from New York City are dashed. Can Wells Fargo detective Jake Hicken be trusted to pick up the pieces?