Last month, I shared about the existence of dinosaurs in Colorado. Hard to believe when you look at the land today, but there are fossilized footprints and tons of evidence all over the state. If you missed that post, you can read it here: https://www.hhhistory.com/2020/08/dinosaurs-in-colorado.html.

Today, let's move from what roamed about the ground to what soars high in the sky and entertains millions every year.

This past weekend marked the 44th anniversary of a hot air balloon festival in Colorado Springs. Every year on Labor Day weekend, dozens of pilots gather in Memorial Park to launch their amazing balloons over the heads of thousands of attendees just as the sun is peeking through the morning clouds and shining on the "purple mountain majesty" mountains to the west. They also do a balloon "glow" at sunset where the balloons remain grounded but inflated and at set times, they all release the liquid propane into the burners and shoot the flames inside, making them "glow." It's quite a sight to see, and my family has made it a tradition to go every year.

This year was a bit different due to the restrictions of large gatherings, so instead of a single gathering at one park, the festival spread out all over the city. There were 15 different launch sites and balloons filled the air from every direction it seemed. Since they were too far away from my vantage point, I'm sharing some photos from previous years. 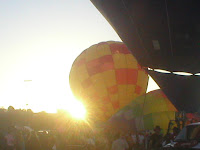 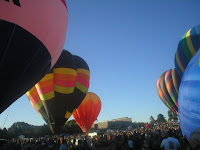 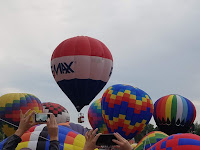 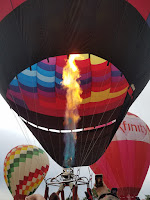 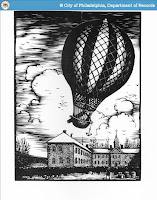 The first balloon flight in America was in 1793, observed by a rather substantial crowd which included President Washington. However, the aeronaut was Frenchman Jean Pierre Francois Blanchard. Therefore, when Durant took off in 1830, he was the first *American.* Ballooning still seemed new and exciting in the United States, and not many had succeeded. The New York Post wrote:

"The spectacle drew many people to the Battery, which was literally covered with an immense multitude of every age, sex, and color, whose faces were all turned upward. It is estimated that upwards of 20,000 people were collected to see a man risk his neck for their amusement and for their money." 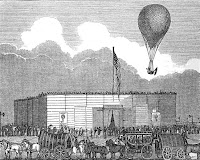 
Doesn't that make you want to find someone who owns a hot air balloon and beg them for a ride? I know my children beg me every year to ride in one, and so far, I have been successful in deterring them. It's an expensive venture. Nearly $250 per person! I might be able to at least get them into the basket of a balloon next year so they can take a picture. Between now and then, we'll see if I can manage an actual flight. Personally, I'd like to take one first -- one that ends with a glass of wine to toast the successful adventure. *winks*

* Have you ever taken a ride in a hot air balloon or stood inside the basket?

Tiffany Amber Stockton has been crafting and embellishing stories since childhood, when she was accused of having a very active imagination and cited with talking entirely too much. Today, she has honed those childhood skills to become an award-winning and best-selling author and speaker who is also an advocate for literacy as an educational consultant with Usborne Books. She loves to share life-changing products and ideas with others to help better their lives.

She lives with her husband and fellow author, Stuart Vaughn Stockton, along with their two children and two dogs in Colorado. She has sold twenty (23) books so far and is represented by Tamela Hancock Murray of the Steve Laube Agency. You can find her on Facebook and GoodReads.
Posted by Tiffany Amber Stockton at 1:00 AM