Enrique Caruso was born in Naples in 1873 and became a well-known operatic tenor of his time. He had seven siblings but only three survived infancy. Some stories say his parents had 21 children and 18 of them died, but from the various accounts I read this was not true, just a rumor. Caruso himself perpetuated the story according to an account by his widow.

Caruso’s father encouraged his son to become a mechanic and trade worker and at an early age, Caruso was apprenticed to an engineer who built fountains. Caruso did work with his father in a factory for a time too. He also attended a school taught by a priest and sang in the church choir. Singing in the choir showed the possible talent he had for singing and brought on his desire to be a musician. 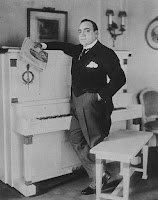 Enrique’s mother encouraged his singing. She died when he was fifteen and Caruso’s family needed financial help. He started singing on the streets and at cafes to earn extra money. He earned enough to take some voice lessons and began to perform in more prestigious places.

In 1895, Caruso’s debut as a professional was at the Teatro Nuovo in Naples where he performed an opera, L’Amico Francesco. He received more operatic parts in various opera houses and was trained by Vincento Lombardi, improving both his range and his style.

Despite his voice and skills being in demand, Caruso didn’t have much money. In 1896, he did a publicity photo in a bedspread that resembled a toga because his only nice shirt was being laundered. The lack of income would drastically change in the coming years.

In 1903, Caruso traveled to New York to debut in the Metropolitan Opera. He regularly performed in New York, plus traveling the world giving performances. The role of Dick Johnson in Puccini’s, La Fanciulla del West, was one written specifically with Caruso’s voice in mind and Caruso created the role.

Not everyone loved Caruso. His popularity, particularly in New York, drew the attention of a group known as Black Hand, who were extortionists. They demanded money from him starting with the sum of $2,000. If he did not pay, they threatened to pour lye down his throat or hurt his family. He paid the amount but that only emboldened them. When they demanded more, he worked with the New York City police. A detective impersonated Caruso and the villains were caught. 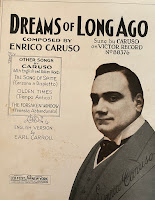 Caruso met Ada Giachetti, a married woman who because his vocal coach and his mistress. She bore him four sons but only two of them lived. They were together for eleven years. In 1918, he married Dorothy Park Benjamin, the daughter of a New York lawyer, and they had a daughter.

His career included over 850 performances at the New York Metropolitan Opera. He toured not only the United States, but Europe and South America. He was said to have a keen business sense and that contributed to his success as much as his wonderful tenor voice. Caruso made more than 250 recordings, which earned money for him and later for his family. He was also paid well for his performances. He appeared in two motion pictures. He received many decorations and honors, but sadly died young—at forty-eight—from health complications.

Have you ever heard of Enrique Caruso? Have you listened to his opera music? Here is a link to him singing, O Sole Mio. I’d love to hear what you think of his voice.

Nancy J Farrier is an award-winning author who lives in Southern Arizona in the Sonoran Desert. She loves the Southwest with its interesting historical past. When Nancy isn’t writing, she loves to read, do needlecraft, play with her cats, and spend time with her family. You can read more about Nancy and her books on her website: nancyjfarrier.com.
Posted by Nancy J Farrier at 3:30 AM