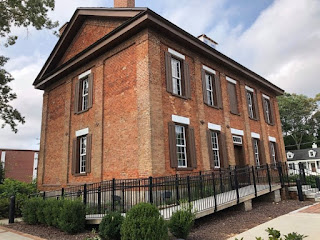 Continue with me on my tour of the historic sites of Gwinnett County, Georgia, north of Atlanta. Tucked on an acre just off the Lawrenceville, Georgia, square, the Lawrenceville Female Seminary serves as the Gwinnett County Historical Museum. A landscaped lot cradles the former school, a dry goods storage building moved from another location, restroom and storage buildings, and the 1827 Isaac Adair House, the subject of next month’s article. 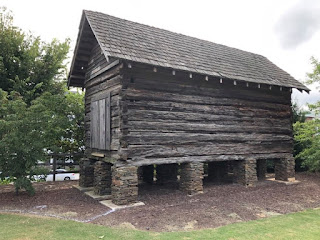 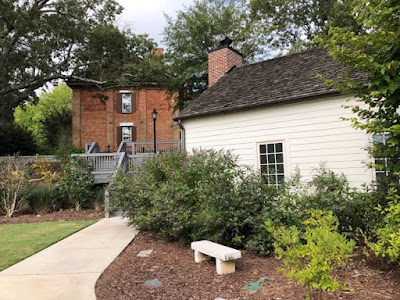 Starting in 1820, a series of lotteries divided land along the border of Cherokee Territory into 250-acre tracts. Veterans of the Revolutionary War and the War of 1812 received two entries. Lawrenceville became the seat of Gwinnett County in 1821 due to its location near a free-flowing spring. The first school in the area was the Lawrenceville Academy (1826). Washington Academy was constructed in 1827 to serve the western part of the county, with a corresponding school for young ladies built in 1837. The land was deeded by the justice of inferior court for “religious and educational purposes.” Some have speculated about the Lawrenceville Female Seminary’s similar appearance to the Dahlonega courthouse, constructed two years prior. 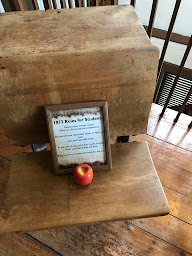 The first classes were held September 24, 1838. Daughters of merchants, professionals, and planters lived on-site to receive instruction in basic subjects, conversational French, and needlepoint. Boys ten and under were occasionally allowed to visit the female pupils. The first principal and instructor was Miss Martha Wells, whose office was on the second floor. She would step outside her door to pull the rope attached to the bell in the bell tower to summon students to the downstairs classroom.

The red brick building with brown shutters guests tour today is the second school on the site, the first one having been destroyed by fire around 1850. The current structure was built between 1853 and 1855 and used as a school until 1886. As part of the agreement for financing the rebuilding of the seminary, the Masonic Lodge met in the second story for more than a century before constructing the adjacent brick building. During the first half of the twentieth century, the school became a civic center and was narrowly rescued from purchase by Dairy Queen in 1971. A group of historic-minded citizens rallied to restore the building and place it on the National Register. The dedication occurred September 8, 1974.