I love a good ghost story. Does that mean I believe in ghosts? No, not really. At least not in the restless spirit of the dead variety. Ghosts are memories. Stories. When I hear stories about a “haunted” house, I don’t care about the current bumps in the night; I want to know the story of the person behind those bumps. I want to know why the story has lived long after the soul has departed.

The Menger Hotel in San Antonio, Texas, has been deemed one of the most haunted hotels in America by people who determine such things. It is a beautiful place—regal and refined. It is full of art and memorabilia, antique furniture and centuries-old fixtures. Its original structure is completely intact, with a clear line delineating just when a guest has stepped from the modern (1940’s) add-on to the elegant lobby that received its first guest in 1857. Go there today, and you can visit the pool, see the place where Teddy Roosevelt signed up his rough riders, and take an evening stroll to the Alamo, only steps away, to see the holiest ground in Texas.

And, at night, especially if you rent one of the “Petite Suites”—rooms that maintain their original (read: tiny) dimensions, you just might have a bit of an encounter with a woman named Sallie White.

Sallie White was a chamber maid who worked at the Menger Hotel. She was killed by her common-law husband on March 30, 1876, on the sidewalk right across the street from a modern-day Starbucks. Fueled by a jealous rage, he shot her in the street, then chased her as she ran for shelter, and finally killed her with his bare hands, choking her to death. Well, nearly to death. It would take her three days to succumb to his attack. He lit out of town, never to be seen again. As a testament to her value, the Menger Hotel paid for Sallie’s modest funeral.
It is Sallie who is said to haunt the Menger to this day. Visitors see shadows, unexplained bits of light. They hear soft footsteps or, according to the long-time employee I talked to while conducting research, the signature knock-knock on their door in the middle of the night. Two swift raps followed by silence. A glimpse through the key-hole revealing no one there.

But, like I said, I don’t believe in ghosts. I believe in imagination. I believe in history. And I believe in story. There are other silly tales and sightings reported at the Menger, but this one prevails because there is such a tragic story attached. Sallie White was a woman of color, perhaps even a woman freed from slavery (though I’ve not seen that researched or proven true). She was killed in cold blood by a man who—at some time—must have been seen as a safe haven for her life. She was a hard worker. Without her infamous death, she might have passed into history unknown and forgotten.

That, my friends, is precisely why we need ghost stories. That’s why we need to constantly bring forth tales of not only the recognized heroes of the past, but those of the ordinary men and women whose lives are a testament to everything we value.

I stayed at the Menger Hotel for three days last summer. It was July, and the hotel had just re-opened after a spring of closure due to Covid-19. The place now boasts over 500 rooms, and I was one of exactly 12 guests. Twelve. One employee was working as bartender, room service, and concierge. I had the freedom to stick my nose in every nook and cranny of that beautiful establishment. I took a hundred pictures, a dozen videos. I sat with my laptop in the ancient (and uncomfortable) lobby furniture, listening to the echoes. The host-of-all trades snuck me through a passage to show me the exact spot of Sallie’s murder. Looking up from the sidewalk, I realized it happened directly below my rented room. I decided then that, if I heard a knock, I would open the door wide.
Later that night, I looked out my window, down at the place where a San Antonio ghost tour was gathering, and I heard the guide telling Sallie’s story with an air of grisly entertainment. I felt a little guilty, knowing I was doing the same in my novel The Lady in Residence. Still, we were engaged in the same pursuit: to keep Sallie White alive by keeping her memory alive—the memory of the ordinary, tragic, hard-working woman.

Whose story do you need to tell? 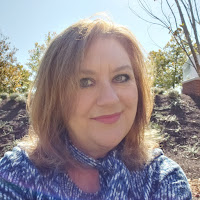 Allison Pittman is the award-winning author of several historical novels, including The Lady in Residence (Barbour Publishing, 2021). She makes her home in San Antonio, Texas, with her husband Mikey and Snax, the world’s worst dog. Visit her website allisonkpittman.com, to see more photos of the Menger Hotel, and to see what other stories she’s crafted from the pages of history.
Posted by Michelle Shocklee at 1:00 AM