Penning a romance forged in the heat of a historical war can be tricky. While all the action and tension can create a powerful plot and move along an attraction, a writer has to portray a time period with accuracy. And that means a great amount of research … then recreating that setting for the reader with sensitivity that doesn’t sacrifice reality. That’s a tall order for battle and fight scenes! For my War of 1812 stories set on the Southern frontier, I not only did a good bit of reading and watching of YouTube videos, but visited various living histories to get in touch first-person with the camps, clothing, and weaponry of American militia and Native American tribes.

During the Red Stick War, Creek Indians were allied to the British while Cherokee Indians joined the Tennessee militia and some regular army units under Andrew Jackson. Native American weapons would have been similar to each other and included tomahawks, swords, bow and arrows, long knives, and older muskets. Cherokees were known to be deadly with tomahawks, trained to split a coconut at a range of thirty feet. Some tomahawks included a spike or a pipe and a hammer. The head can be hafted from the bottom, whereas an axe head is inserted from the top with a wooden wedge. 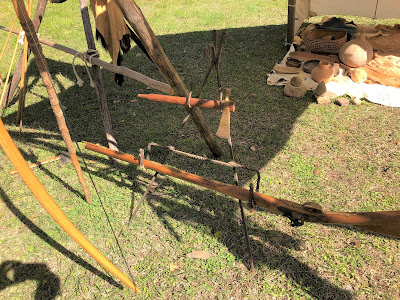 Weighing in at about nine pounds with the fifteen-inch bayonet attached, the 1795 Springfield was the first official model musket of the U.S. Army. The bayonet was originally on the bottom of the barrel but was rotated to the top in 1797. Eighty grains of black powder was rolled into a paper cartridge and muzzle-loaded. The smooth bore of the barrel meant it could be loaded quickly. A good soldier could get off two to three shots a minute. However, with every shot, the carbon built up in the barrel, causing the bullet to bounce around and produce an unpredictable flight pattern.

Rifles were more accurate due to the spiral grooves called rifling inside the barrel. Reloading was slower, though, and burnt gunpowder build-up from repeated firing made it eventually impossible to fire without cleaning.

Common calibers of rifles included .36, .45, and .50. Many regiments of expert riflemen established in 1808 in reaction to the war in Europe carried the U.S. Model 1803 rifle from Harper’s Ferry Armory. At .54 caliber, it was thirty-two inches long without the bayonet. This weapon was shorter and lighter than the Pennsylvania and Kentucky long rifles, easier to fire from horseback or canoe. Riflemen carried two powder horns, one for loading and one for priming the pan with finer powder.

Due to the roads being little more than Indian trails widened by Army engineers, artillery on the Southern frontier was rare. However, at the Battle of Horseshoe Bend, General Jackson leveled a three-pounder (the size of an orange) and a six-pounder (the size of a grapefruit) on the wall of the village of Tohopeka. Cavalry was also rare, but Light Dragoons were issued sabers and pistols, most often the Model 1805 Flintlock from Harper’s Ferry, the first American-manufactured military pistol. .56-caliber, muzzle-loaded, and smooth-bore, these 16” guns were made in pairs with the same serial number.