THE SCOOP ON SPOONS

The first utensil most of us ever used—after eating with our fingers—was likely the spoon, as well as the first eating tool created. Some cultures prefer forks while others favor chopsticks, but most all cultures use a spoon in some form.

The early spoons were likely a shell attached to a piece of wood, carved wood, or a curved section of an animal horn. Before the seventeenth century, ones spoon went with a person virtually everywhere much the same way people don’t leave home without their smartphones today. If you didn’t want to eat with your fingers, you needed to bring your own utensil. 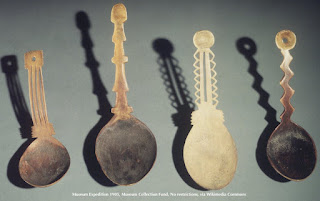 What your spoon was made out of told others a lot about you and your station in society. A person of high status would have a spoon as bejeweled as his or her fingers. The carving on wooden spoons became more and more elaborate with lacework and nearly paper-thin bowls. A suitor might give an intricately carved spoon to his lady love as a sign of his affection and ability to provide. The intricacy of the carving showed one’s capability to support a family. Secret messages were even carved in some.

By the eighteenth century, the high-society homes had whole sets of tableware for their guests to use. Though one no longer needed to bring their own spoon, the material these utensils were made of mattered, the more expensive and ornate the better.

As fashion changed, flatware evolved out of necessity. The elaborate style of large protruding lace ruffs and collars required spoon handles to be elongated to protect expensive clothing from spills. I think, for myself, it wouldn’t matter how long a spoon handle was, I could make a mess of things.

With the invention of silver plating in the 1800s, the need to have a different spoon for every kind of purpose and food seemed a necessity, as manufacturers had done with forks. Over the centuries, more than fifty varieties in a multitude of shapes and sizes have been created. A few of these myriad of spoons were egg spoons, bullion spoons, chocolate spoons, and even a mustache spoon with a shaped ledge to keep the mustache out of the soup. And I mustn’t leave out the after-dinner coffee spoons. Seriously? Evidently, a teaspoon wasn’t good enough. So what spoon does one use for morning coffee? 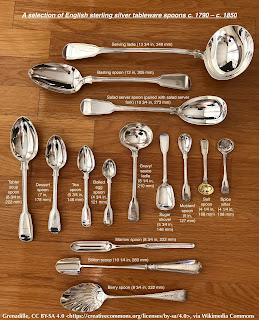 Then there is the runcible spoon. Poet Edward Lear wrote a poem in the 1800s titled The Owl and the Pussycat with the line “They dined on mince and slices of quince, Which they ate with a runcible spoon…” Runcible wasn’t a real word but merely Lear’s favorite nonsensical word. The word became legitimized when it found its way into the Oxford English Dictionary in 1926.

Can you gander a guess at the use for a runcible spoon? Here’s a hint, we still have them today but know them by a different name. Need another hint? They are a confused piece of the tableware often mocked. Still not sure? In the movie Wall-E, the poor robot came across one of these and was challenged as to whether to organize it with his collection of spoons or his collection of forks. Yep, the infamous spork. 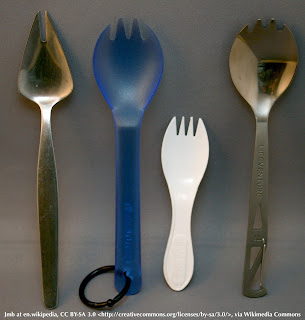 In 1874, the first US patent for a spork-like device was issued to Samuel W. Francis for a utensil with a spoon-like end, a knife edge, and fork tines. One implement to do it all. I’d be afraid I would cut the side of my mouth with that knife edge going in and out. Not until the early twentieth century was the word “spork” coined.

Fortunately, sanity prevailed, and the plethora of options was pared down to two basic spoon—without knife blades on them—for the table: the teaspoon and the tablespoon. There are variations still in use like an ice tea spoon and fruit spoon which are also common.

Regardless of ones preferred method, whether fingers, chopsticks, or the infamous spork, we all must agree: the spoon has become a cultural icon, worthy of anyone’s collection.