A recap: in winter of 1864, most of the Navajo Nation had been captured in Arizona Territory and marched by the army to Fort Sumner in New Mexico Territory, a distance of roughly 400 miles.

Their misery had only begun.

In 1863, 500 Mescalero Apaches were brought to Fort Sumner. Add to that, the Apaches were nomads who despised the Navajo and conflict was inevitable.
Beginning in 1864, the first of upwards of 9500 Navajo were brought. Unfortunately, Fort Sumner could barely support 3000 prisoners, not 10,000, had no housing for any of them, thus people were forced to dig holes in the ground and gather sticks, hides and blankets to build crude shelters that were almost useless on warm days, and utterly pathetic in the winter.
To add insult to their troubles, many prisoners had to make adobe bricks for the camp command's homes and buildings, then go and forage for sticks and coverings for their own squalid dwellings that they dug out of the ground by hand. 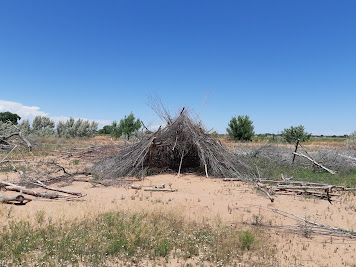 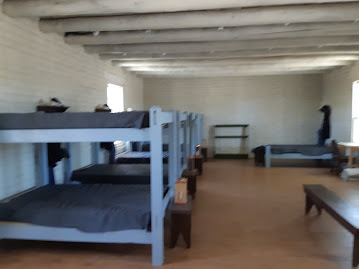 Fort Sumner was a poor location for a prison camp, and given that the primary water supply, the Pecos River, contained water that was useless to both humans and animals due to a naturally occurring high-salinity count, or in Samuel Taylor Coleridge's words, "water, water, everywhere, and not a drop to drink".

From the day the camp opened, the supply of fresh food and water was an ongoing concern, especially with the foolish plans of various fort commanders, but primarily Carleton, wanting agriculture to be "taught" to the Navajo. So, an agrarian people who'd grown their own corn for centuries were forcibly taught to grow their own corn by white soldiers who may or may not have known a single thing about corn. 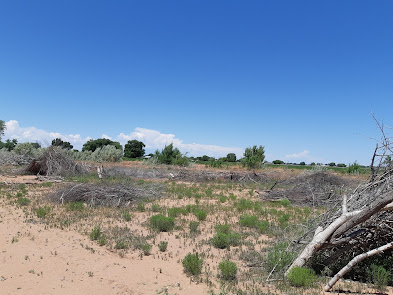 Food was a constant source of strife. The prisoners were made to stand in line for rations of bacon (usually rancid), green coffee beans, and flour, none of which were part of their normal diet. Illness ran rampant through the camps, and many prisoners died of starvation, malnutrition, and food and water-borne diseases. Hunting was not fruitful due to the lack of sufficient game, and the dangers posed by roaming gangs of Mexican and Comanche slavers just beyond the camp boundaries.

Once their crops of corn were in the ground each of the first three springs in captivity, hope took root among the people. But prior to each harvest season, each crop of corn was lost to varying calamities, including a particularly horrible infestation of cut-worms. During the fourth spring in captivity, the people refused to plant any crops.

As deadly as the food supply was, the water was its own monster. The prisoners were forced to dig acequias, irrigation canals to move the water from the Pecos into the fields of corn and other crops. Not only were the tools primitive at best, the fact that since there was a meager supply of fresh water, which went first to the fort command and staff, boiling the Pecos water only made it worse, which led to multiple intestinal issues for the prisoners. 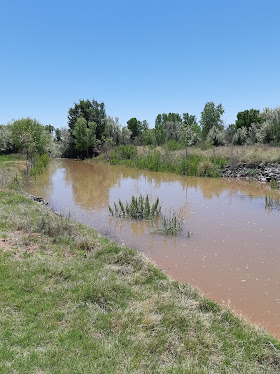 Perhaps the most dangerous time to be a prisoner at Fort Sumner/Bosque Redondo, or as the Navajo called it, Hweeldi, was spring.

The run-off from the distant Sangre de Cristo mountains, where the Pecos River's headwaters began, was in full force, which could easily lead to accidental drowning, and the lack of decent food because the overland wagon-trains bringing in supplies were subject to Comanche, Mexican and local raiders.

The constant promises to and by fort command of better supplies for the prisoners grew more shallow each year, and by summer of 1868, when they were released by General William T Sherman, nearly 2500 prisoners had died of starvation, malnutrition, and dehydration.

All at a place created to make them into "God-fearing Christians". 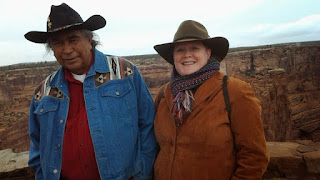 Jennifer and her Navajo mentor, Theodore Charles, USMC (ret) B.Ed and M. Ed, at Canyon de Chelly, AZ.
Jennifer Major is a Vancouver girl living 3000 miles away in Eastern Canada with her husband, the tree scientist. They have four grown children, and a kleptomaniac Lab puppy named Bear.

You can find her at www.jennifermajorbooks.com

All photos are the author's.