Things That Go Boom in the Night 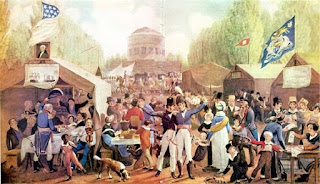 It’s that time of year again, time to celebrate our country and our freedom. My family operates a fireworks stand so as we prepare for the 2021 holiday, I wondered just how long firecrackers have been around. Did someone invent them sometime after 1776 to be used in our Independence Day celebration? Nope. Turns out people were enjoying firecrackers centuries before our forefathers signed that Declaration.

Though no one really knows for sure, many historians think that fireworks originated around A.D. 800. Chinese alchemists mixed saltpeter, sulfur and charcoal to make a crude gunpowder, apparently in search of a recipe for eternal life. They packed the powder into bamboo shoots and threw them into a fire creating a loud blast. Once they realized what they had made, the Chinese came to believe that these explosions would keep away evil spirits. 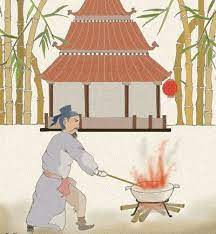 These firecrackers were used in celebration of the most important events in life – a birth, a wedding, a death, holidays, and coronations. By the 10th century, the Chinese had figured out that they could make bombs with the gunpowder, and so they attached firecrackers to arrows that they shot at enemies. Within the next 200 years, fireworks were honed into rockets that could be fired at enemies without the help of an arrow, a concept still used today in firework shows.

Fireworks eventually spread to Europe to celebrate military victories and were later used in public celebrations and religious ceremonies. Legend has it that Captain John Smith set off the first fireworks display in the American colonies in Jamestown, Virginia in 1608. Furthermore, fireworks were likely used in the very first 4th of July celebration. John Adams wrote in a letter, "The day will be most memorable in the history of America. I am apt to believe that it will be celebrated by succeeding generations as the great anniversary festival. It ought to be solemnized with pomp and parade … bonfires and illuminations [fireworks] … from one end of this continent to the other, from this time forward forevermore." His prediction was right, and the tradition began in 1777 and every year since then.

You knew I couldn’t make it to the end of this blog without mentioning Laura Ingalls Wilder. Laura described the Fourth of July Celebration like this: The music was so gay; the bandsmen in their blue and red and their brass buttons tootled merrily, and the fat drummer beat rat-a-tat-tat on the drum. All the flags were fluttering and everybody was happy, because they were free and independent and this was Independence Day. ~Farmer Boy, by Laura Ingalls Wilder. 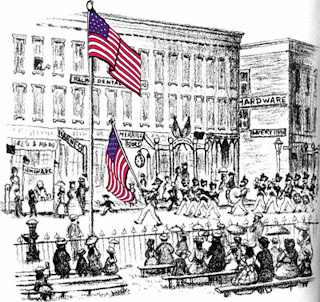 In the books, Independence Day was always glorious.The sun shone and everybody reveled in their pride in being American. Of course, life isn’t always like that. Take the 4th of July in 1881, for example. This is the year of the Independence Day Laura described in Little Town on the Prairie. In her version, the town gathered around the flagpole, where the Declaration of Independence was read and Star Spangled Banner was sung. There was free lemonade and horse races, and politician handed out firecrackers. All under a shining sun with a happy crowd. The 38-star flag flew over De Smet, and the rest of the nation, in 1881. 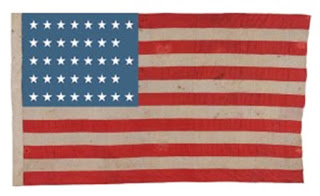 In actuality, July 4, 1881 was a wet, gloomy day in De Smet, South Dakota. Any readings, speeches, or singing took place inside the hardware store. There was no Pledge of Allegiance, because it hadn’t been written yet – that would come about a decade later. And the crowd wasn’t happy all day. President Garfield had been shot 2 days earlier. News of this tragedy and worry for the President’s life (he lived 80 days before dying of infection from the wound) would have dampened the spirits more than the rain. 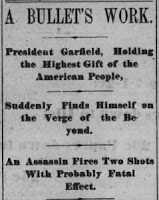 But telling that story isn’t celebratory and surely Laura wanted the children who read her books to learn a sense of patriotism and freedom. Certainly, Laura would have enjoyed fried chicken and lemonade, rousing speeches and songs, horse races and fireworks on various Independence Days, so she drew on these experiences, combined them, and gave us an iconic vision of what the 4th of July should be.

How do you celebrate the Fourth of July? I’d love to hear about it in your comments.

Rand isn't looking for love. He'd ridden that trail. He needs a wife to care for his orphan nieces. Desperate, he places an advertisement and hopes for the best. Fleeing her former employer who would use her to further his unlawful acts, an advertisement reads like the perfect refuge to Carly. Escaping the danger to hide herself on a Kansas cattle ranch is her best shot for freedom. But sanctuary comes with a price.While marrying a man she doesn't know or love means sacrificing her dreams, it's better than being caught by the law. Or is it?