My last post revealed my surprise when I learned a War of 1812 fort once existed in the county where I grew up. That’s unusual for North Central Georgia. Constructed in the fall of 1813 as a defense against Creek Indians allied to the British, Fort Daniel also served as a jumping-off point for the construction of one of Atlanta’s iconic routes—Peachtree Road.

During the Creek War, supplies for the American army had to be rafted across the Chattahoochee River nine miles below present-day Columbus, Georgia. Then they were taken by wagon to Fort Mitchell, which was built by General John Floyd in the summer of 1813 as the main supply depot for the troops in the field (present-day Alabama). A two-pronged plan was launched to better supply those troops. First, a road would be built southwest to the Chattahoochee River, where a fort would be constructed. Simultaneously, a boat would be built that could launch from farther up the river.

The X on the map fell on Standing Peach Tree, a Creek Indian village on both sides of the Chattahoochee River at the mouth of Peachtree (as it came to be called) Creek. The village served as the terminus for the Creeks’ Peachtree Trail, which ran along the top of the Chattahoochee Ridge from near present-day Toccoa to what is now Buckhead, where it divided. One branch continued to Standing Peachtree. The other branch ran across Peachtree Creek toward the Sandtown Tail at Five Points in what is now downtown Atlanta. 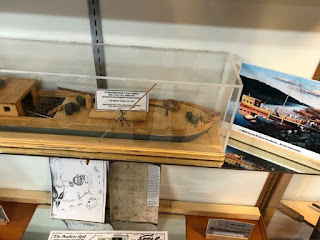 In December of 1813, after being appointed deputy quartermaster, Major Thomas Bourke commissioned a boat to be built under a Lieutenant Morris at Vann’s Ferry that could navigate the Chattahoochee south from Peachtree.

Meanwhile, the route from Fort Daniel to Peachtree followed a trail from Hog Mountain to Suwanee Old Town (the east-west dividing line between Creek and Cherokee Indians), across Peachtree Ridge, and on to the Peachtree village—a total distance of about thirty miles. Lieutenant George Gilmer would oversee a detachment of twenty-two soldiers which would accompany three locals, stock raisers, who would grade the road after an initial team marked it out. But first, Sergeant James Montgomery, Jackson County resident and US Army wagonmaster, learned when he arrived at Fort Daniel that no tools had arrived. He had to scour the countryside for whipsaws, axes, and a cross-cut saw. The sons of the local men drove the carts. One night, the fathers had some fun at the expense of the boys as they ate dinner, riding in from picket duty whooping like Indians.

Bourke’s boat left Vann’s Ferry on January 23 and reached Peachtree by February 11. The supply chain for the army had begun. 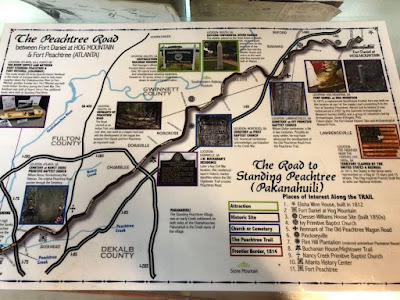 At the fort site, the soldiers raised two large blockhouses, six dwelling houses, one frame storehouse, a bridge, and five boats, costing the government a whopping five thousand dollars by the time work was completed in July of 1814. By then, the Creek Indians had been defeated and signed treaties giving away most of their land. James Montgomery, the sergeant in charge, loved the area so much, he later returned to become postmaster of Standing Peachtree and establish Montgomery’s Ferry.

And Peachtree Road just got busier and busier after that.