The other day, I walked through the room as my husband had the Western Channel on. Some of the TV shows and movies in the western genre are, shall we say, less than accurate. I mean, come on. Playing cards with numbers on them? The wrong train whistles? Rough and tumble women with coral lipstick, false eyelashes, and pearls?
Yep, that last one really got to me. The actress was Judi Meridith in The Raiders (1963) and she was playing Calamity Jane. 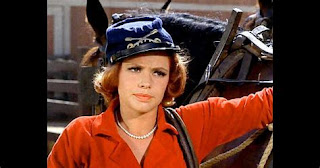 Of course, when it comes to unlikely actresses taking on the iconic role, Doris Day and her tiny waist comes to mind. Other bombshell actresses to play the frontier woman include Jane Russell in The Pale Face, Yvonne de Carlo (The Munsters) in Calamity Jane and Sam Bass, and Anjelica Huston in Buffalo Girls. The latter played her closer to the vest.
With all the singing, hair flipping, and doe eyes for Bill Hickok, it made me wonder who the real Calamity Jane was. 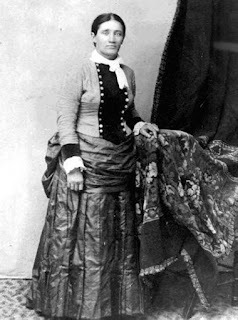 Much of her life is shrouded in mystery and tall tales, some told by the woman herself. Let me be clear. Any truths about Calamity Jane have been blowing like ash from a long dormant campfire and many “experts” disagree on certain points. One seemingly accurate researcher tackled the subject and believes he was able to separate the truth from the myth. James D. McLaird refutes just about everything you’ve ever heard. But the larger-than-life legend is so much more interesting. If you wish to learn what he found, I suggest you visit Calamity Jane and Wild Bill Hickok (historynet.com)
Born Martha Jane Canary on May 1, 1856 in Princeton, Missouri, she died on August 1, 1903 at the age of 47. It’s said she looked twice her age at 30 due to a hard life.
That hard life started with her father who was a farmer (or gambler. . .or perhaps a gambler turned farmer,) and her mother, a prostitute. Both died leaving pre-teen Martha, the oldest of six, to take care of her siblings. It was on the wagon train with her family that Martha learned how to be a teamster, driving a team of oxen, using a 30-foot bullwhip to spur them on. 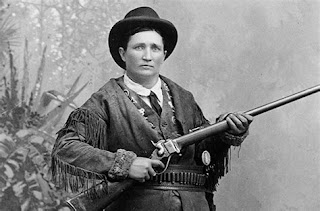 Much of the rest of her story is filled with adventure as she is said to have fought Native Americans, worked on the railroad, and according to her, rode for the pony express, though one or more of these accomplishments are probably just sensational tall tales. At one point, she became a scout at Fort Russell in Wyoming, something McLaird refutes. She also worked in saloons, and for a brief time followed the family business (the world’s oldest profession.) She did anything needed to take care of her brothers and sisters. Again, McLaird believes her siblings were farmed out to family. He also claims that she often wore dresses and did women’s work. But, of course, we also know that besides the mundane, she also dressed like a man, shot like a man, and rode a horse like a man. Not to mention her penchant for alcohol, smoking, and, shall we say, colorful words. 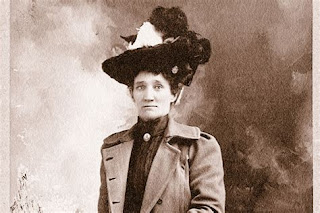 Calamity and Bill Hickok rode into Deadwood in June of 1876 in the same wagon train party. They became friends, but probably not lovers. A woman claiming to be their daughter surfaced, but it was proven fraudulent. Later, Jane supposedly married a man named Burke around 1885 and they did have a daughter. . .some think, others say no. Calamity Jane's history is so sketchy! Hickok and Calamity shared similar interests as both were dime novel celebrities and no doubt drank together. They’re buried near one another in the Deadwood cemetery, which fuels the imagination as to their relationship. If one were to weed through the sensational stories, one would find that the two only knew each other for a couple of months. Hickok was murdered while playing poker on August 1, 1876 by a man who was avenging his brother's death. Apparently, the lawman killed him in another town. Hickok was holding two pair: black aces and eights. This has been dubbed the dead man’s hand as a result. Twenty-seven years later, Jane was on a train and became ill. She made it to the Calloway Hotel in Terry, near Deadwood where she died on August 1, 1903, on the anniversary of Hickok's death. Her demise was most likely from her life of hard drinking. 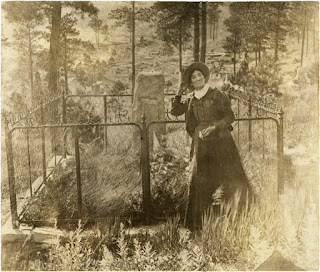 At the grave of Bill Hickok in the 1890's
Deadwood, Dakota Territory
Somewhere along the way, she earned the name Calamity Jane and embraced the fitting moniker, even writing her own dime novel of her (ahem) true exploits. No doubt most of it was a work of fiction, but she read it aloud to eager audiences, I imagine performing some of the action. 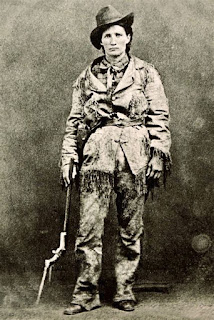 To capitalize her notoriety, by 1893 she became employed in Buffalo Bill’s Wild West Show run by Bill Cody. In 1901, she traveled with the troupe to Buffalo, New York and the World’s Fair Pan-American Exposition. 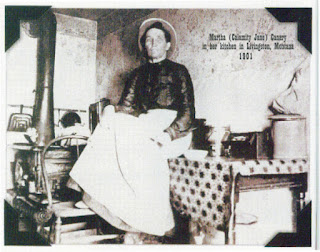 In her kitchen with a cigar
Livingston, Montana 1901
Among the wild tales, Martha Jane had a heart of gold. It's been said that she exhibited compassion to the sick and needy. She worked as a nurse during a smallpox outbreak in Deadwood, volunteering to work where the fainthearted dare not go.
Tall tales aside, Martha Jane Canary turned out to be a colorful character in our nation’s history. She may not have been your run-of-the-mill pioneer woman, but if she had been, she never would have carved her name, Calamity Jane, into our hearts.