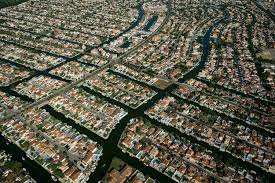 I hope you’ve enjoyed our virtual visits to the beautiful and historical canal cities of Europe and Scandinavia. If you missed last month’s trip to Copenhagen, click here (https://www.hhhistory.com/2021/07/canal-city-copenhagen-denmark.html). Today we’re going to travel over 2,000 miles south across Europe to the city of Empuriabrava, Spain.
Located on the Costa Brava in the municipality of Castelló d’Empúries in the province of Girona, Empuriabrava is the largest residential marina in Europe. The city has over twenty-four kilometers (15 miles) of canals and approximately 5,000 private jetties. The year-round population of 7,800 swells to more than 80,000 inhabitants during the summer season. With over seven miles of beaches and 300 days a year of sunshine, it is a popular tourist destination.
Unlike the ancient canal cities of Europe, Empuriabrava was planned for 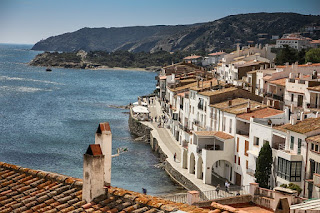 recreation rather than defense and has been in existence for less than fifty years. In the late 1960s, a group of visionaries presented a plan to city officials to transform the swampy area to a world-class resort. Construction began in 1968, and was completed in 1975.
Castelló d’Empúries is a small medieval town with a history that stretches back to 1079 when it became the county’s capital in place of Sant Marti d’Empúries that was continually sacked by pirates. The town grew and developed over the next three centuries, until 1385 when it joined the Crown of Aragon (created when the Kingdom of Aragon and the County of Barcelona were united by marriage). 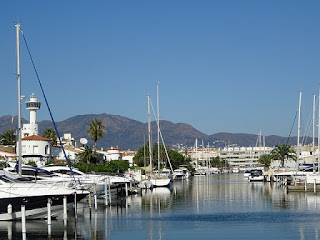 Within the Crown, the Catalan counties adopted a common polity and developed its own institutional system. Mediterranean trade flourished. By 1640 Catalonia revolted against the large presence of the royal army, and for a short time, became a province of France. During the War of Spanish Succession, Catalonia sided against Philip V of Spain and was defeated. In 1714, a unifying administration was imposed across the country which suppressed Catalan institutions and rights.
In the beginning of the nineteenth century, Catalonia was severely affected by the Napoleonic War, and in 1808 was occupied by French troops. The next one hundred and fifty years saw growth and industrialization mixed with rebellion and wars, until the death of dictator Francisco Franco in 1975, when it entered a democratic state.
____________________________

Linda Shenton Matchett writes about ordinary people who did extraordinary things in days gone by. A volunteer docent and archivist for the Wright Museum of WWII, Linda is a former trustee of her local public library. She is a native of Baltimore, Maryland and was born a stone’s throw from Fort McHenry. Linda has lived in historic places all her life, and is now located in central New Hampshire where her favorite activities include exploring historic sites and immersing herself in the imaginary worlds created by other authors. Learn more about Linda and her books at http://www.LindaShentonMatchett.com.
Gold Rush Bride Caroline:

She thinks he’s high-handed and out for her gold. He thinks she’s difficult and money-hungry. Will they discover that love is the true treasure?
Scarred in a childhood accident, Caroline Vogel has yet to find a man willing to marry her, so she heads to the Pike’s Peak gold fields to pan enough ore to become a woman of means. When she and the handsome assistant trail boss hit it off, she begins to hope her future may not be spent alone. Then she catches wind of dark secrets from the man’s past, and she’s not sure what or who to believe.
Orphaned as a teenager, Oliver Llewellyn stole to survive, then used his skills for the army during the war. Nowadays, he applies his knowledge to catch dangerous thieves for the Pinkerton Agency, so guarding a young woman during a wagon train journey should be easy. But he didn’t count on the fact she’d angered a man bent on revenge. He also didn’t count on losing his heart.
Purchase Link: https://amzn.to/3eRQj3Y
Posted by Linda Matchett at 12:30 AM