I love historic buildings. You too? When I take a tour or wander freely (my favorite!) through an old building, my imagination goes wild, with dozens of questions filtering through my mind at the speed of light. Who walked where I walked? What's their story? What secrets do the walls hold? And on and on.

Hence is the case with Union Station in Nashville, Tennessee. The moment I saw this beautiful old building I knew I had to find out more about it.In 1900, the first trains to roll through Union Station were operated by the Louisville & Nashville and the Nashville, Chattanooga & St. Louis railroads. Engine No. 5 of the NC&StL's was given the honor of being the first train to stop at the terminal. For the next seventy-eight years, thousands of passengers would arrive in Nashville via trains with names like Dixie Flyer, Dixieland, Floridian, and the Carolina Special. The station was also used by streetcars prior to their discontinuance in Nashville in 1941.

The striking building is built in the architectural style described as Richardson Romanesque. The entire building, designed by Richard Monfort, chief engineer for the L&N, is made of gray stone and marble from right here in Tennessee. The total cost at the turn of the century came to $300,000. I'm not good at math but even I know that would be in the millions of dollars in today's money.

A bronze statue of Mercury, the mythical Roman god of speed, stood atop the clock tower, which housed an early version of a digital clock. Unfortunately the statue was blown off in the 1950s by a tornado.

In 1943, Union Station served as a shipping-out point for thousands of soldiers headed to war. Sadly, train travel began its decline in the 1960s, forcing many stations to close. By 1978, with less than six trains per day, Union Station joined them. Preliminary plans to convert the building into a federal office complex fell through, and Union Station was eventually sold to hotelier Leon Moore of Gallatin, Tennessee. Determined to retain the original design, Mr. Moore employed local craftsmen and created a beautiful, up-to-code hotel.
Today, Union Station is a luxury boutique hotel in the heart of downtown Nashville. The elegant lobby reminds visitors of bygone days when passengers waited for their trains. Well-appointed guest rooms now fill spaces where railroad offices were once located, and a restaurant and bar offer more than peanuts and a Coke.
Someday I hope to splurge and stay a night or two in this lovely and fascinating place!
Your turn.
Have you traveled by train?
I haven't, so tell me about your experience!

Michelle Shocklee is the author of several historical novels and is a Selah Awards finalist. Her work has been included in numerous Chicken Soup for the Soul books, magazines, and blogs. Married to her college sweetheart and the mother of two grown sons, she makes her home in Tennessee, not far from the historical sites she writes about. Visit her online at michelleshocklee.com.
UNDER THE TULIP TREE
Sixteen-year-old Lorena Leland’s dreams of a rich and fulfilling life as a writer are dashed when the stock market crashes in 1929. Seven years into the Great Depression, Rena accepts a position interviewing former slaves for the Federal Writers’ Project. There, 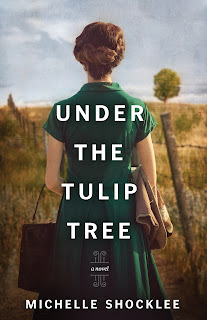 she meets Frankie Washington, a 101-year-old woman whose honest yet tragic past captivates Rena. Frankie’s story challenges Rena’s preconceptions about slavery, but it also connects the two women whose lives are otherwise separated by age, race, and circumstances. Will this bond of respect, admiration, and friendship be broken by a revelation neither woman sees coming?
https://www.amazon.com/gp/product/B085F4YQ11/ref=dbs_a_def_rwt_bibl_vppi_i0