Deep in the Bolivian Andes, hundreds of miles from both oceans, high above the tree line, and at a physically crippling altitude of 13,300 feet, sits the city of Potosi. Above the city, at nearly 16,000 feet, sits Cerro Rico, the "rich hill" that dominates the Andean Altiplano, the "high plains".

Potosi, (POH-TOE-SEE) was once a city booming with 160,000 people and as important and famous as London or Madrid, and the fourth largest city in the Christian world.

There was a word back then for extreme wealth, "Potosi". 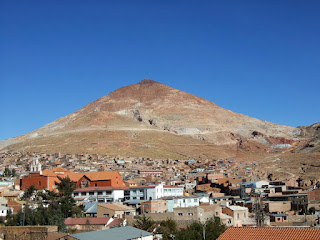 In the 1500s, the Spanish swept across South America in a vicious race with the Portuguese to conquer the people and exploit the riches. Rumours of El Dorado, the City of Gold, drove these men to annihilate everything in their path with no regard whatsoever to the Indigenous cultures in their way, unless they were of some use as soldiers or more likely as slaves.

With Cortez defeating the Aztecs in 1521, and the Pizarros actively involved in destabilizing the Inca Empire, starting with the arrival of smallpox in the 1520s, and the royal approval by Queen Isabella to conquer Peru, the Conquistadors freely plowed across the continent without repercussion for their slaughter.

They had several goals, but the main two were:

One: conquer everyone, use, kill, or enslave whomever you want or need to.

The biggest, literally, source of plunder was Cerro Rico. A somewhat dull looking mountain in an inhospitable area of Bolivia (at the time, it was part of the Viceroy of Peru) that stands mighty and imposing above the city of Potosi, which was a mere village prior to the arrival of the Spanish.

In 1545, a Inca miner named Diego de Huallpa was forced to spend the night on the mountain and once his fire was going, he spotted a 'white and shining vein-pure silver", and for the next 200 years, silver fed the Spanish Empire.

But in 1571, with the discovery of a mercury amalgamation process to extract silver from the mined ore, (which slaves had to carry in 45 kg/100lb sacks on their backs, with a daily quota of 25 sacks) production exploded and the wealth poured from Potosi to Spain, and around the world. 22 dams powered 140 mills that ground the ore. Between the 16th and 17th centuries, 80% of the world's silver came from Cerro Rico.

The labour for this mine came in the form of African slaves, Indigenous slaves (Inca, Aymara and other enslaved people-groups), and locals who worked for meagre pay, and the death toll over over nearly five centuries from mining is in the millions. Some estimates are as high as 8 million.

Yes, millions of people, mostly men, died in the mines, and from disease caused by the mines all around Cerro Rico and Potosi, such as mercury poisoning, pneumonia and silicosis, all due to the inhumane conditions allowed by the Spanish.

An estimated 60,000 tonnes, or 120,000,000 pounds (yes, one hundred and twenty million pounds) of silver was mined out of Cerro Rico over the centuries, resulting in hundreds of miles of tunnels, which have contributed to a dangerously unstable honeycomb phenomenon inside the mountain.

Cerro Rico is still in the business of extracting metals, and the health of men and children. Yes, children.

Today, roughly 90% of jobs in Potosi are with mining companies, which are unregulated, or turn a blind eye to the dangerously poor working conditions. The mountain is still mined for tin and zinc, but not much silver.

In 2011, 466 years after the discovery of silver in Cerro Rico, part of the cone collapsed and had to be filled in with ultra-light concrete.

I've been driven through Potosi several times, and marveled at the bleakness of it. It is a hard city, with very little beauty. A friend who still lives in Bolivia told me once that people will mine that mountain until it collapses on itself, feverishly looking for another source of silver to lift them out of poverty.

Jennifer Major writes about Navajo history and lives with her husband near Canada's East Coast.

She has visited Bolivia four times to serve the Quechua people, who were once known as the Inca. The teams serve by invitation in villages of the Altiplano by bringing short-wave radios equipped with audio Bibles, with the Bible spoken entirely in Quechua. 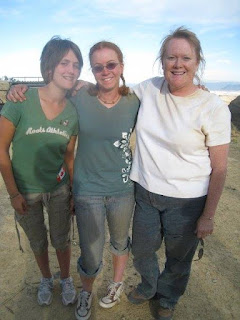 Jennifer and two friends in Bolivia, not far from Cerro Rico, after a trip down from the Altiplano which included 72 switchbacks on a dirt road.