The Cottages of the Jekyll Island Club Part I

My previous two posts revealed how Gilded Age tycoons created a retreat on an island off the coast of Georgia. The beautiful, Queen Anne clubhouse opened for the winter season of 1888. But fifty lots had been set aside for members who wished to build their own “cottages,” and as crowding became an immediate issue in the clubhouse, some members pursued this option. Though the cottages built on Jekyll [originally Jekyl] Island changed hands many times, a total of fifteen were built—most of which are restored and on the current historic trolley tour.

1. McEvers Bayard Brown supposedly built his cottage an inhospitable distance from the club house for his wife, who jilted him. He fled the country aboard his yacht, dropping anchor off the coast of England, where he became increasingly eccentric. He authorized club employees to use the house and continued to send money to the club.

2. Philanthropist Nathaniel Kellog Fairbank of Chicago built the second cottage in 1890, just south of the clubhouse. While Fairbank thrived on the island, considering it a retreat from scandalous legal cases in which he’d become entangled, his wife disapproved of Jekyl’s rustic chapel.

3. At the same time, Charles Stewart Maurice of Athens, Pennsylvania, was constructing his house. Hollybourne blended island materials including the use of tabby with Flemish style. Designed by New York architect William Day, the house cost $19,100 to build. Charles and Charlotte became historians and authorities on Jekyl wildlife until her death by typhoid in 1909. Wicker, chintz, Oriental rugs, and animal skins decorated the interior.

4. Porches, turrets, and a gazebo enhanced Solterra (1891), the grand frame home of Frederic Baker, head of a New York warehouse firm. Multiple parties and President William McKinley were hosted at Solterra. On March 9, 1914, a fire broke out in the attic, destroying the home.

5. Architect Walter Rogers Furness of Philadelphia, the club’s youngest member at twenty-six, built his home in shingle style with a rounded front corner. In 1896, he sold to Joseph Pulitzer. Eventually, the cottage became the island infirmary. 6. The cottage of Gordon McKay, who made his fortune improving and patenting a process for sewing boots during the Civil War, was constructed in 1892. McKay shocked society by divorcing his first wife and later marrying his housekeeper’s daughter. His generosity to his second wife did not end after they, too, divorced. In 1904, William Rockefeller purchased the cottage and named it Indian Mound.
7. Owner of a Philadelphia marble works, William Struthers, built Moss Cottage in 1896. His daughter, Jean, was very active in the island’s social and sporting life. The family entertained often and lavishly. George Macy purchased the property in 1911.
Join me in October for fascinating glimpses of the last eight cottages of the Jekyl Island Club. 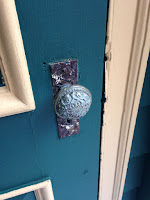