The History of the Royal Canadian Mounted Police

Fans of Janette Oke’s book, When Calls the Heart, and the popular television series by the same name, will have heard of the North-West Mounted Police. Not everyone knows that Ms. Oke is Canadian or that the police force to which the dashing Jack Thornton belongs was the forerunner of the Royal Canadian Mounted Police—today’s RCMP.

The 1873 map of Canada looks nearly unrecognizable from today’s. The Northwest Territories (NWT) covered a vast area of land, represented not only by the current NWT, but by all of Alberta and Saskatchewan, most of Manitoba, and the northern parts of what are now Ontario and Quebec. With no provincial status with which to set up police services, the federal government stepped in and formed the North-West Mounted Police (NWMP) on May 23, 1873.

From the start, NWMP members needed to be skilled riders as they carried out police duties across prairies and mountains, often riding for days without encountering any people. In 1886, the NWMP’s first riding school was established in Regina. Over time, the Musical Ride was created and has continued to this day as a unique Canadian tradition, performing across the nation and around the world.

Not everyone in Canada feels affection and pride for our national police force, however. In 1884, the first Prime Minister of Canada, Sir John A. Macdonald, stated that “the business of the Mounted Police is principally to keep peace between white men and Indians.” It’s not surprising that over a hundred years later, Maria Campbell, a Métis author, playwright, broadcaster, filmmaker, and Indigenous Elder, wrote: “The myth of the RCMP is that they came to protect us from the whisky traders and bad guys. They came to protect the conqueror’s property and they still protect the conqueror’s property.”

In recognition of their thirty years of service in 1904, King Edward VII awarded the title of “Royal” to the NWMP, officially creating the Royal North-West Mounted Police (RNWMP). What a handle! World War I brought more changes, as did the establishing of Alberta and Saskatchewan as provinces. On December 12, 1918, the government split federal policing duties so that the Dominion Police maintained their duties in eastern and central Canada, while the RNWMP handled the west. Then, in 1920, the name was changed to Royal Canadian Mounted Police (RCMP) and headquarters were moved from Ottawa to Regina, Saskatchewan, and absorbed the Dominion Police.

In August 1950, the RCMP added policing duties in British Columbia, Newfoundland and Labrador. While Ontario and Quebec still have their own provincial police forces, the RCMP is now active across the entire country. Although they’ve long since exchanged their horses for cars and their red serge for more practical daily uniforms, the traveling Musical Rides still provides a beautiful traditional show of horses and the ceremonial dress of the RCMP. 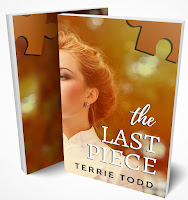 Terrie Todd was the recipient of the 2018 ICWF Janette Oke Award. She is the award-winning historical fiction author of The Silver

Suitcase, Maggie’s War, Bleak Landing, Rose Among Thornes, and the recently released The Last Piece. She also writes a weekly “faith and humor” column for the Graphic Herald called Out of My Mind. In 2020, she published a ten-year anniversary collection of her favorite columns in her only nonfiction book, Out of My Mind. Terrie is represented by Mary DeMuth of Books & Such Literary Agency.