Last month, I share some fast facts about Kentucky with some amazing yet fun tidbits. If you missed that post, you can read it here. This month, we're taking a closer look at The Kentucky Derby, which is close to celebrating it's 150th anniversary (in 2024).

It has been heralded as "the greatest two minutes in sports," and it's the longest continuously-running sporting event in the country. The event dates back to the very first race on May 17, 1875. Today, it is run on the first Saturday in May every year. What started as a 1.5 mile race is now a 1.25 mile race run by three-year-old thoroughbreds. It is the first leg in the challenging and coveted Triple Crown series of events, although that name didn't become widespread until the 1930s. Out of those three, the Kentucky Derby has the highest attendance.
This event began because of efforts from Meriwether Lewis Clark, Jr., the grandson of explorer William Clark, of the famous Lewis and Clark team who mapped out the land from the Louisiana Purchase. After traveling to Europe in 1872, Clark, Jr. (known for throwing elaborate and extravagant parties and inspired by the races he attended in England and France) returned home to Kentucky and founded the Louisville Jockey Club. He used the club to raise money to build a racetrack on land donated by his uncles, William and John Churchill. 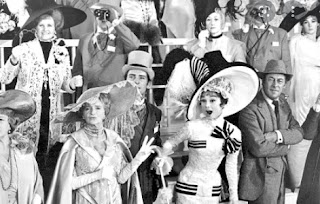 Organized by the 12th Earl of Derby, England's Epsom Downs racecourse had been the home of the Derby Stakes since 1780. That location became the primary influence behind Churchill Downs and the Kentucky Derby. Clark wanted to bring a certain level of class to his track by attracting an upscale crowd, thereby improving the image of American racetracks everywhere. If anyone remembers the memorable eyebrow-raising scene at the racetracks in My Fair Lady, you can envision the social atmosphere at the Kentucky Derby. It resembles a high tea event, complete with mint juleps, flamboyant head ensembles, and a collective singing of "My Old Kentucky Home" as the racehorses parade in front of the attendees before each race. A mint julep is a famous drink which originated in the South. As a sign of wealth, it was served in a silver cup. It is made of what else but bourbon, sugar, mint, and crushed ice. Sounds delicious! I've never had one, but I'm going to be on the lookout for a good one. Guess I'll have to learn the lyrics and music to "My Old Kentucky Home" now too! The 19th century ballad by composer Stephen Foster was reportedly first played at the Derby in 1921 and remains a part of the Derby traditions to this day.
In 1902, new management took control of Churchill Downs and plucked the Derby out of the local fame it had enjoyed, turning it into America's most iconic horse race. The first race in 1875 boasted a little over 10,000 attendees who came to watch fifteen (15) thoroughbreds run the distance. They were primarily the city's most stylish residents, and the event became THE social event of the season--a place to see and be seen. 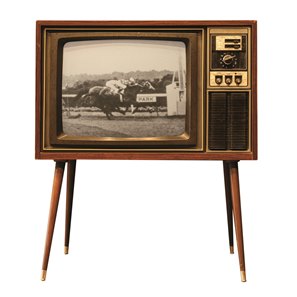 With the advent of the radio, measures were taken to broadcast the Derby across the airwaves. Although some thought it would detract from the event's solid attendance, the first network radio transmission in 1925 only sparked more interest. 1949 marked the Derby's first television broadcast locally, and in 1952, it made its debut on national television. Today, over 160,000 people come from around the world to attend the Kentucky Derby. Tens of millions watch it on television. It is THE signature event in the state of Kentucky, brimming in abundance with traditions, legends, and icons...and of course the bourbon-based mint juleps!
My daughter has inherited my love of all things horses, and I promised her a visit to Churchill Downs. There is a phenomenal Kentucky Derby Museum on the grounds, and a lot of additional features you can add to your museum ticket. I definitely look forward to making that trek. 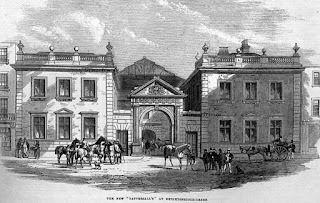 As a little teaser for my May post, the area where I now live is called Tattersall Estates, named after the world-famous London horse breeding venture and auction, Tattersalls. Every street here is named after a famous racehorse or connected to a term from horse racing. I live on Secretariat, the record-holder since 1973 for the fastest time in all three of the Triple Crown races. I'll share more next month.
NOW IT'S YOUR TURN:

* Are there any horse races anywhere else in the U.S. that you have attended? Where are they?

Leave answers to these questions or any comments you might have on this post in the comment box below. Come back on the 9th of May to learn more about famous Triple Crown racehorse winners.
For those interested in my "fictional" life as an author and industry news about other authors, subscribe to my newsletter. Receive a FREE omitted chapter from my book, A Grand Design, just for subscribing!