WAR TO END ALL WARS

Theodore Roosevelt, or as most Americans remember him, Teddy Roosevelt was a visionist. He was the beloved 26th president of the United States from 1901 to 1909. During his term, he established the first national state park, built the Panama Canal, and formed the first U.S. Volunteer Cavalry that became an essential strategic necessity in winning the Spanish-American War. 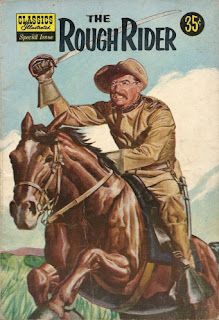 In the year of 1912 Teddy Roosevelt decided to run for the presidency again but lost the Republican party ticket to William Taft. However, Teddy had a large public following who encouraged him to run as an independent. On August 4, Teddy accepted the nomination for presidency by the Progressive platform, often called the Bull Moose Party.

One of the key points of Teddy’s run for the presidency was his “Square Deal” platform. The platform was society founded on fair business competition and more welfare for those Americans who needed a hand up.

In the 1912 election, Woodrow Wilson defeated Republican William Howard Taft and Theodore Roosevelt. Wilson ran on a progressive platform, much like Roosevelt’s.  Little did Roosevelt and Wilson realize at the time how closely connected in their thinking they were. 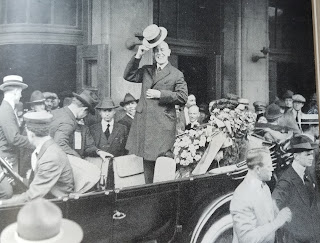 In August 1914 after the assassination of Archduke Ferdinand of Austria, Germany invaded France, and Russia invaded Germany, which brought on World War I—the War to End all Wars. Wilson didn’t want any part of this war and proclaimed that the United States would remain neutral.

Then on May 7, 1915, a German U-boat sank the British passenger ship RMS Lusitania off the southern coast of Ireland killing 1,195 people. Among the passengers slain, were 128 Americans. 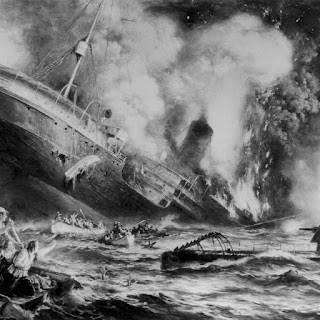 President Wilson warned Berlin that if they should sink any more ocean liners, it would be considered a “deliberate and unfriendly act.” (archives.gov WW1 America enters) Many Americans were furious and called Wilson a “human icicle.” Roosevelt called him a “Byzantine logothete,” meaning an official who talks a lot but does nothing. Other Americans approved of Wilson’s efforts to maintain peace. (World Book Encyclopedia pg. 273)

Wilson ignored the comments and began to prepare the people of the United States for conflict.

Many citizens did not hold the same viewpoints as their president and chose to fight. They left the peaceful hills of America for the poppy fields of Dover. Wilson won the presidential election in 1916 easily. Threats and tensions grew between America and Germany throughout the following years. They reached steam-whistling proportions on February 24, 1917, when a telegram sent by the foreign minister of Germany was intercepted by Great Britain.

Zimmermann, the foreign minister of Germany, had sent the telegram to the ambassador in Mexico. Exploring the idea that if Germany went to war with the United States, Zimmermann wanted Mexico to declare war on the United States and request that Japan cooperate as well. In return, Germany would financially aid Mexico and, once the United States was beaten, support Mexico in retaking Arizona, New Mexico, and Texas, the territories wrestled from Mexico during the 1848 Mexican-American war.

Wilson sought to break diplomatic relations with Germany and petitioned Congress to arm United States flag merchant ships with guns. Congress refused. Wilson used his executive powers and directed Secretary of the Navy Josephus Daniels to place naval armed guards aboard American vessels. However, guns fixed on the decks of civilian ships were like match sticks compared to the superior U-boat guns built to destroy ships in one blow. 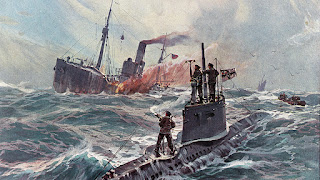 On April 1, 1917, a deeply concerned President Wilson climbed his church steps. This was no normal Sunday. He needed God’s guidance; war was imminent. He’d begun writing a speech he planned to read before the House and Senate—only, he hoped never to have to read it.

Wilson confided later to a close friend, “…once I lead the people into war, they’ll forget there ever was such a thing as tolerance. …To fight you must be brutal and ruthless, and the spirit of ruthless brutality will enter into the very fiber of our national life, infecting Congress, the courts, the policeman on the beat, and the man on the street.” ((AGWW1) On the evening of April 2 at 8:20 p.m. as a light drizzle peppered the grass, Wilson could just make out the sharply dressed cavalrymen waiting for him. Their sabers now drawn, they greeted him as his car drove up the drive of the Capitol. The American flag proudly flew above them, illuminated by floodlights.

Wilson remembered watching as a boy the cavalry’s grey and blue uniforms of South, then North galloping down the road toward another Civil War battle. Teddy showed the foresight and courage to muster up the Rough Riders and was ready to fight when Spain sunk the battleship Maine—now it was his turn.

Through the droplets of rain, beneath sabers drawn, Wilson walked, his shoes hitting the pavement, splashing through the puddles and up the Capitol steps, his shoulders burdened by the election promises he’d made. None included placing their young men in harm’s way. This must have been what presidents like George Washington, Abraham Lincoln, and Teddy Roosevelt had felt.

He'd tried to avoid war. He’d seen all the shedding of blood he wanted to see as a youth. The sabers above his head shone with beads of rain—or were they the tears of every mother and sweetheart longing for their loved ones’ return?

Yes, these cavalrymen had their swords—he had his words that could strike down these young men in the prime of their lives—brave, insubmissive and incapable of breathing the air of tyrants. And he knew these men would fight to their last breath, like those Americans had who’d left America’s peaceful shores for the battlefields of Europe—because truth is more precious than peace. God be with us…

Before the packed House of Representatives, Wilson fumbled with his notes, perspiration peppered his brow. He described the U-boat attacks on hospital ships and vessels carrying relief supplies to Belgium and called this “a warfare against mankind.” His gaze then met the members of Congress, “I advise that the Congress declare the most recent course of Imperial German Government to be in fact nothing less than war against the government and people of the United States.”

“Furthermore,” the President said, “there is one choice we cannot make, we are incapable of making, and that is we will not choose the path of submission.” (AGWW1)

He finished thirty-eight minutes after he started, with these immortal words: “But the right is more precious than peace, and we shall fight for these things which we have always carried nearest our hearts—for democracy, for the right of those who submit to authority to have a voice in their own Government, for the rights and liberties of small nations, for a universal dominion of right by such a concert of free people as shall bring peace and safety to all nations and make the world itself at last free. To such a task we can dedicate our lives and our fortunes, everything that we are and everything that we have, with the pride of those who know that the day has come when America is privileged to spend her blood and her might for the principles that gave her birth and happiness and peace which she has treasured. God helping her, she can do no other.” (World Book pg. 274)

The Congress rose to their feet in one gigantic wave in an earth-pounding applause. On April 4 the Senate voted overwhelmingly to approve Wilson’s call for war 82 to 6, and two days later on Good Friday, the House of Representatives took up the war question. At four in the morning, exhausted from debating, 373 members responded yea while six answered nay. 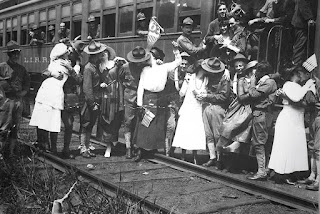 It would be later that the thoughtful Wilson would remark to a friend, “Think what it was they were applauding. My message today was a message of death for our young men.”

World War I was known as the “War to End all Wars.” The Allies believed they were fighting against an evil militarism that had taken hold in Germany and to end all wars was synonymous with a hope for a better future. The War to End all Wars kept its heavyweight title until the year of 1939. 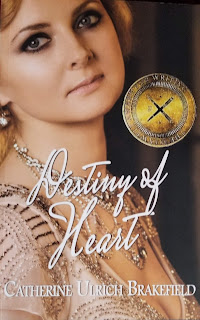 Confusion and uncertainty hover around Ruby McConnell Meir's skirts like the dust storms—will her husband live or die?

The War to End All Wars opened America’s eyes, the Roaring Twenties brought the countryfolk to the city, and then came the Great Depression. Collina faces insurmountable odds to rescue Shushan for her family. Rough Rider Franklin Long loses what money couldn’t buy and wonders, “Is it too late to make right his failings?” 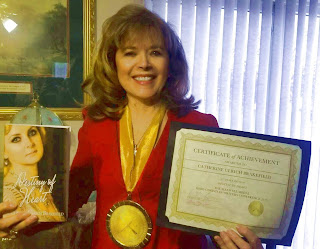 “My readers are my encouragers and God's Word is my inspiration!” says Catherine.

Catherine is an award-winning author of the inspirational historical romance Wilted Dandelions, Swept into Destiny, Destiny’s Whirlwind, Destiny of Heart, and Waltz with DestinyHer newest book, an inspirational Amish futuristic romance, Love's Final Sunrise will be out soon.

Catherine lives with her husband of 50 years, has two adult children, and four grandchildren. See https://www.CatherineUlrichBrakefield.com for more information about her books. 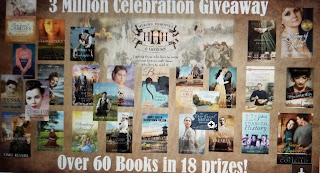 To celebrate reaching 3 Million views, HHH is hosting a HUGE giveaway of over 60 books in 18 prizes, so there are many chances to win! One grand prize will consist of 10 books, two readers will win a second prize containing 5 books, and there will be 15 winners of a third prize containing 2 books each. There are several ways to earn entries, such as following, or commenting on the HHH blog each day. Thank you for being part of the HHH community, and best wishes in the giveaway!
http://www.rafflecopter.com/rafl/display/ce16d9c612/?
Posted by Catherine Ulrich Brakefield at 12:30 AM