by Rebecca May Davie

Welcome to the birthplace of William the Conqueror. This is the Calvados department of Normandy, France. The area is now known as the city of Caen. 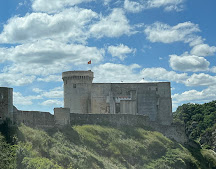 Who was William the Conqueror? He became the first Norman
King of England. He was born in 1027 to Duke Robert the Magnificent and a Falaise tanner’s daughter, Arlette. Duke Robert died when William was a mere eight years old. William then began adding on to Le Chateau de Falaise (his family’s castle) and in addition, ordered the construction of two churches. His early years were turbulent with the deaths of many of his teachers and aids. King Henry I of France helped him navigate and knighted William in his teens. 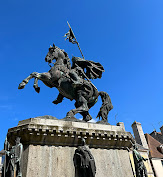 The King of England, Edward the Confessor, did not have children and promised William succession. He died and William expected to secede. Yet, Harold Godwin was placed on the throne even though he
himself swore fealty to William just two years before. After, they met at the Battle of Hastings on October 14, 1066. Harold was fatally wounded with an arrow. William was “The Conqueror.” Just ten weeks later, on Christmas day, William was crowned the King of England at Westminster Abbey.
Immediately following his coronation, he began to invade England. He built castles with fortifications, installed allies, and squelched revolts with bloody battles. Life for the English changed without delay. He overhauled their language, religion, and other facets of daily life. King William built over 700 motte and bailey castles including the notable Tower of London and Windsor Castle. The structures began in wood that was replaced with stone. He required a census of people and property that was compiled into the Domesday Book. He died at the age of 60. 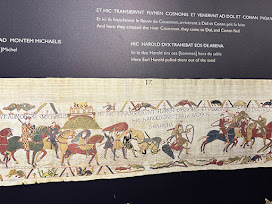 There are many methods to learn about life of William the Conqueror. A visit to Bayeux and The Bayeux Tapestry on display at the museum give a glimpse into his timeline. This embroidered fabric is 70 meters long and shows William’s conquest. Susan Page Davis wrote a post  on Heroes, Heroines, and History, The Bayeux Tapestry. 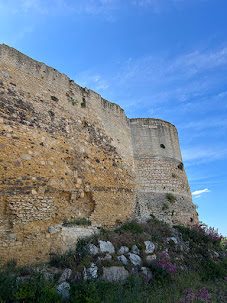 While in Caen, visitors can experience where William lived. Tour Le Chateau de Falaise. Tablets available at check in, point to emblems throughout the building. These enable scenes to appear as the rooms were in William’s time. Imagine walking into a large Bed Chamber (half the square footage of a basketball gym) with a similarly high ceiling. Surrounded by stone walls, a fireplace camps along the side. A solitary bed adorns one wall. Two chairs flank the bed. This is all that is visible to the naked eye. Yet with the tablet, there are tapestries, rugs, curtains, and chairs. This volume of fabric assisted in keeping the immense, stone rooms warm. Heat also radiated from fireplaces and small braziers set in the middle of the spaces. 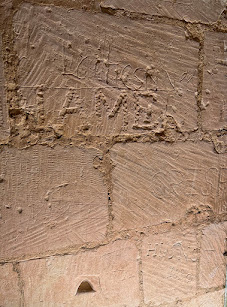 Wander up and down tight, steep stone staircases to see other open rooms. The Great Hall, Chapel, and apartments all offer virtual tours via touch tablet. In most rooms there is a film featuring a member of the Anglo-Norman court describing their daily life. These snippets give visitors an opportunity to learn about trades, clothing, food, and other features of the 11th century. In some halls there are protected etchings and carvings from the knights of the time – medieval graffiti, so to speak. Outside the Keep walls, viewing machines enable visitors to envision village life. 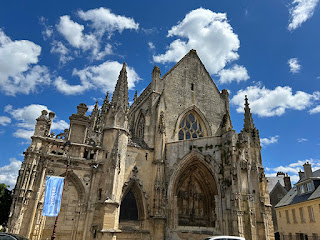 See the church of William’s youth at the base of the castle. L'église de la Trinité à Falaise, visible in the photo at right, was constructed in 840. It suffered damage and was rebuilt in 1204 in the gothic style.
Whatever the source, it is possible to learn a small measure about living in the 11th century. After visiting, the life of William the Conqueror may seem rife with strife. Opinions do continue to vary on his rule. Until a visit is possible, YouTube offers videos about his years and peeks inside the castle. Take a look…


As a child, Rebecca loved to write. She nurtured this skill as an educator and later as an editor for an online magazine. Rebecca then joined the Cru Ministry - NBS2GO/Neighbor Bible Studies 2GO, at its inception. She serves as the YouVersion Content Creator, with over 75 Plans on the Bible.com app.
Rebecca lives in the mountains with her husband, the youngest of their two sons, and a rescued dog
named Ranger. If it were up to her, she would be traveling - right now. As a member of ACFW, FHLCW, Jerry’s Guild, and Hope*Writers, Rebecca learns the craft of fiction while networking with a host of generous writers. She is working on her first fiction novel. This story unfolds from the 1830s in Northern Georgia.