Dance Marathons -- Can you Dance and Sleep at the Same Time?

Hi everyone. Pam Meyers here. This month, I've invited Connie Cortright to guest post here, presenting an article she wrote on another blog. Having written a book set in the 1930s that focused on the Big Band era, I found her discussion of dance marathons of great interest. Below is Connie's article "Dance the Night Away."

You can get to know Connie at her blogsite "Through the Milk Door," which focuses on life in the 20s, 30s, and 40s.

By Connie Cortright
During the month of May, high school seniors look forward to their prom dances. That tradition, older than the 20s and 30s, still continues today. However, there is one very popular dancing tradition that is not around anymore. That is the dance marathon. 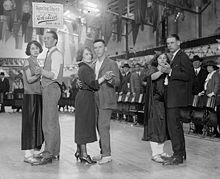 Dance marathons got started during the Roaring Twenties for entertainment. These events were hosted and promoted in towns across the country. The winner of the contests were the last dancers on the floor still standing. The amazing thing about these was the length of time they lasted, some longer than two months.
The pairs of dancers, who all started on the first day of the marathon, were required to be in constant motion, picking up one foot and then the other, 45 minutes of each hour. The other 15 minutes were the rest period. As the hours wore on, those were the only minutes they could collapse on a cot behind a curtained area and sleep. They even ate - twelve meals a day - while they were dancing with food provided by the sponsoring organization. The participants stood next to a high table, placed on the dance floor, and ate while keeping their feet going.
The dancing couples became accustomed to sleeping on their feet. One partner would be the "carrier" dragging the sleeping partner around the dance floor. In some cases the sleeper would have his/her hands 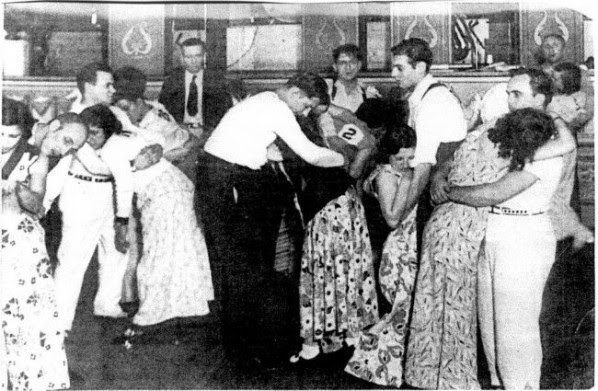 tied around the carrier's neck so that they wouldn't fall. They were disqualified when someone's knees touched the floor, so the carrier had to make sure this didn't happen. When the women were carriers, this must have been a challenge.
During the Great Depression, marathon promoters went from one town to the next holding these events. For many people who didn't have jobs during these hard times these marathons provided a roof over the heads of the contestants and food for empty stomachs. Many dancers actually became "professionals",  couples driving from one marathon to another as a means of making a living. These professionals outlasted any inexperienced dancers, winning prizes of hundreds or even a thousand dollars.
Huge crowds, paying twenty-five cents per person, came to these events for entertainment. The emcees would focus on one couple or another trying to raise the drama in the contest so the town people would return night after night. 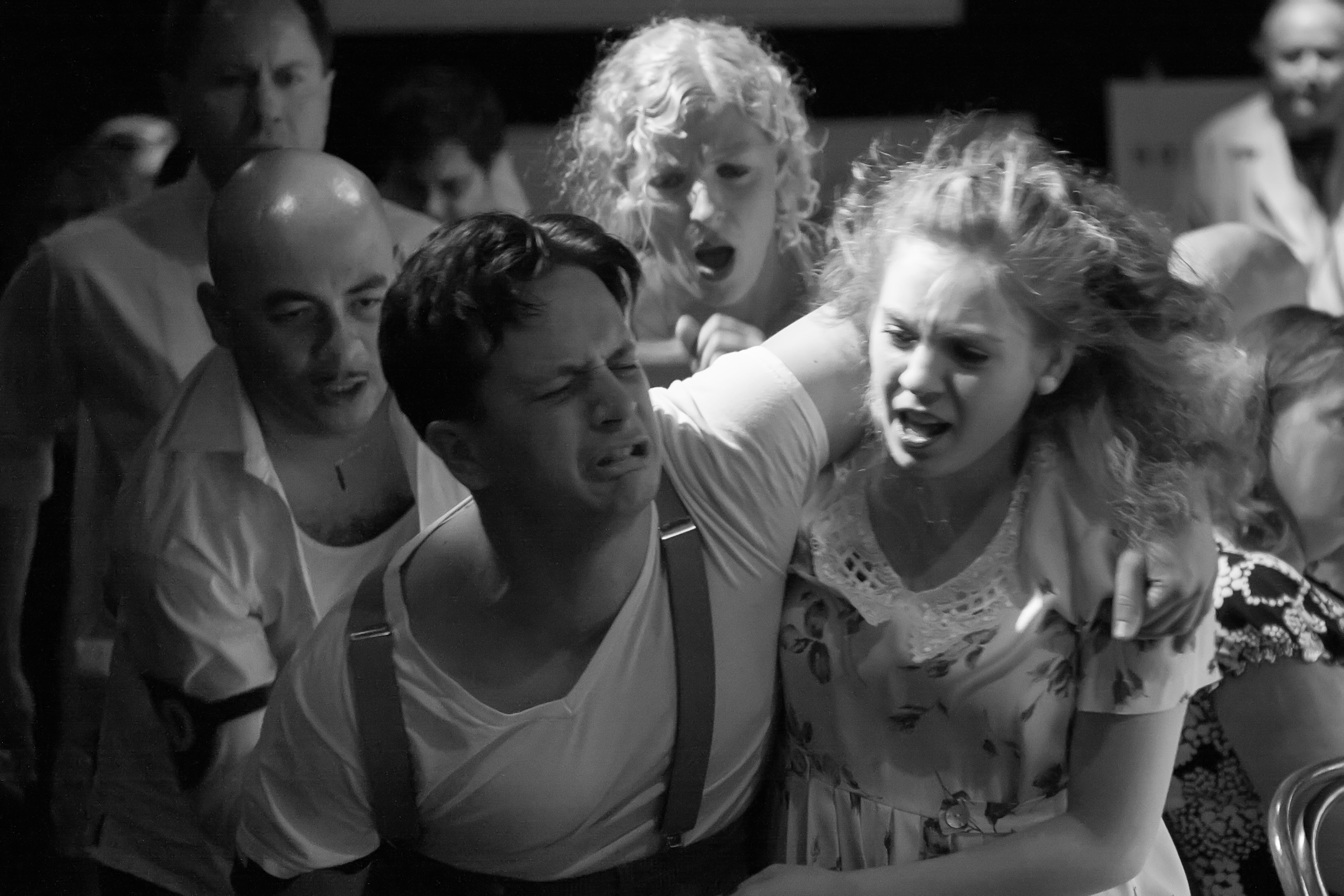 When interest in the the marathon lagged, or it got down to the last few couples, the promoter would schedule special elimination events and advertise them on the radio to get the crowd coming back again. These elimination events could be hour long races around the dance floor with the couples tied together or other types of events. The idea was to get the weaker couples to collapse on the floor getting the contest to end sooner. After dancing more than a month these torturous races caused injury for the contestants. In some cases contestants died during these events.
Toward the end of the 30s, the marathons became more inhumane. The promoters grew rich from the misery of the contestants. After several years, states started outlawing these marathons. By the end of the 30s, the era of the dance marathon ended. World War II brought a complete halt to these events because the unemployed young men were now employed by the US Army.
Information taken from HistoryLink.org

A native of Lake Geneva, Wisconsin, author Pamela S. Meyers lives in suburban Chicago, an hour's drive away from her hometown which she visits often to dig into its historical legacy. Her novels include Thyme for Love, and Love Will Find a Way,  contemporary romantic mysteries and her 1933 historical romance, Love Finds You in Lake Geneva,Wisconsin, released in April, 2013. She can often be found speaking at events around Lake Geneva or nosing in microfilms and historical records about Wisconsin and other Midwestern spots for new story ideas.
Posted by Pamela S. Meyers at 6:00 AM