Today marks what would have been the birthday of one of America's greatest heroes, Daniel Boone. A dedicated frontiersman and explorer, Daniel Boone became one of the most celebrated men in American literature and inspired boys and girls around the nation long after his death.

Daniel Boone was born on November 2, 1734 to Sarah Morgan and Squire Boone in a log cabin in Pennsylvania. He was the sixth born of eleven children. He had a love of the outdoors and even as a young adult, he supplemented his family's income by hunting and trapping.

Daniel's father, Squire Boone, had emigrated to Pennsylvania because he was persecuted in England for his Quaker faith. However, this faith benefited Daniel and his pursuit of hunting and exploration. The area where Daniel was raised was, at the time, the edge of the frontier. The Lenape Indian tribes resided nearby, and because the Quakers were pacifists, they enjoyed good relations with the tribe. The Lenape contributed to Daniel's knowledge of the wilderness. At the age of twelve, Daniel received his first rifle.


Since Daniel's education was informal, at best, many expressed concern over his illiteracy. Boone's spelling was....unconventional. However his father defended him by saying, "Let the girls do the spelling. Dan will do the shooting." However, Daniel did possess enough education to accomplish his calling in life. While the majority of his time was spent as an outdoors man and frontiersman, he also went on to become a politician. Daniel Boone was an avid reader. He often took reading material with him on hunts and excursions, and he would often entertain his companions by reading to them. His favorites were the Holy Bible and Gulliver's Travels. 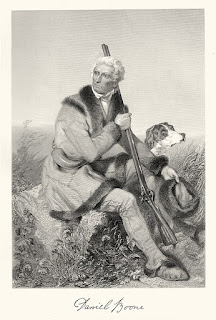 Since Boone grew up as a Quaker, it is interesting that he volunteered for the French and Indian war, and also served during the Revolutionary War. However, his family was expelled from the Quaker fellowship when he was a young man, and he identified as a Christian, but not as a Quaker. It could be that the experience of excommunication caused him to renounce his family's Quaker beliefs.

Despite the obstacles that Daniel Boone faced throughout his life, he is an inspiring example of courage and what one person can accomplish in a lifetime. These qualities make him an outstanding man and icon in American history and literature. It is men like him that make us proud to be Americans.

*****
Two-time winner of the Christian Indie Award for historical fiction, Amber Schamel writes riveting stories that bring HIStory to life. She has a passion for travel, history, books and her Savior. This combination results in what her readers call "historical fiction at its finest". She lives in Colorado and spends half her time volunteering in the Ozarks. Amber is a proud member of the American Christian Fiction Writers Association. Visit her online at www.AmberSchamel.com/ and download a FREE story by subscribing to her Newsletter!
Posted by Amber Schamel at 12:00 AM