Plymouth Colony and the Rock

Where Did They Land?
by Martha Rogers 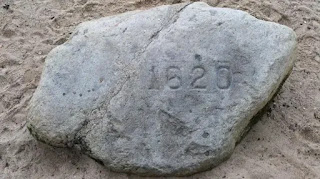 Much lore, legend and tradition surrounds the first colonies of the new land on the Atlantic coast. The Mayflower was one of two ships that set sail for the new America to escape the hard times for the Pilgrims in England. The ship Mayflower arrived in Plymouth Harbor in 1620, after first stopping near today's Provincetown. According to oral tradition, Plymouth Rock was the site where William Bradford and other Pilgrims landed.
However, there was no complete evidence that they actually first stepped foot on the rock. That claim didn't come until 121 years later in 1741 when Thomas Faunce, whose father was a passenger on the ship, said his father and several other passengers had assured him that was the spot they landed.
The ship made its first stop at what is now Provincetown on November 11, 1620. Since they did not have a patent to settle there, they realized they needed some form of a governing document. This resulted in the Mayflower Compact. The
intent of the compact was to establish a means of governing the colony, and it resembled the same ones of towns they'd left in England. It was modeled on the church covenants of the Congregationalists and made clear the colony would be governed by just and equal laws. 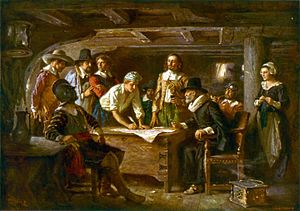 Forty-one men signed that contract aboard the ship. After several weeks of trying to find a place to settle, a skirmish with Indians led them to set sail for another port. The Mayflower dropped anchor at Plymouth Harbor on December 16 and
spent several days looking for a settlement site. They decided on the recently abandoned site of the Patuxet tribe largely because of its defensive position centered between two hills. Also, the fact that the previously cleared land made agriculture relatively easy helped their decision. This landing is what perpetuated the story of Plymouth Rock being the landing spot.

Until housing could be built and the town established, the settlers lived on the ship. More than half of the settlers became ill and died during that first winter. Finally, in March, they began to move ashore to their permanent dwellings. There they met Squanto who acted as an interpreter and mediator between the native Americans on the land and the Pilgrims.
Although John Carver served as the first governor

of the settlement in 1620, William Bradford is the best known and became governor in 1621. The governor was the most powerful executive who served the settlement along with seven
assistants elected to serve with him as a form of cabinet. The colony leadership worked with the native Americans to learn more about crops and how to survive on the land.
Because of this friendship, the colonists were able to enjoy a bountiful harvest in the fall of 1621. That feast, which took place sometime between mid-September and November over a three day period, has been commemorated as the first Thanksgiving, and is the one most often presented in Thanksgiving pageants and plays.

Most of the Pilgrims in attendance were men because over seventy-five percent of the women had perished during the previous winter. Only fifty colonists were left to celebrate their survival and the harvest.
Plymouth Colony never grew to be the robust village 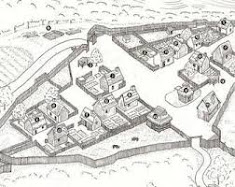 of which they dreamed although it did become
self-sufficient after five years. Then because so many other colonies sprang up and became prosperous, Plymouth was finally absorbed by the Massachusetts Colony in 1691. The drawing to the left is how it is believed that first colony was laid out as a colony.
Today, the original colony of Plymouth is a living museum where visitors can sample colonial food and see a restored Mayflower ll. The first Thanksgiving is also reenacted here each  November.
My husband and I had the privilege of seeing some of those sights when we toured 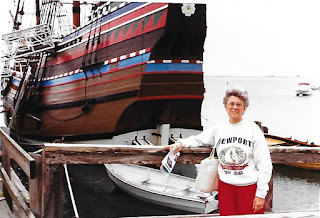 New England a few years ago. The picture is at the dock where the Mayflower is moored near Plymouth Rock.

Martha Rogers is a free-lance writer and best-selling author from Realms Fiction of Charisma Media and Winged Publications. She was named Writer of the Year at the Texas Christian Writers Conference in 2009. She is a member of ACFW and writes the weekly Verse of the Week for the ACFW Loop. ACFW awarded her the Volunteer of the Year in 2014. Her first electronic series from Winged Publications, Love in the Bayou City of Texas, debuted in the spring of 2015.  Martha is a frequent speaker for writing workshops and the Texas Christian Writers Conference. She is a retired teacher and lives in Houston with her husband, Rex. They now have twelve grandchildren and six great-grandchildren.