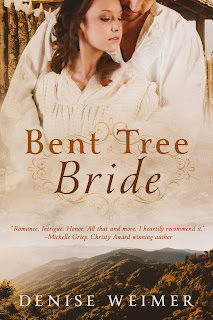 As I’ve approached this month’s release of my Southeastern frontier romance, Bent Tree Bride, I’ve delved into some related historical topics on HHH Blog. We talked about how the Red Stick War—the part of the War of 1812 that involved Creek Indians allied to the British, against Cherokees allied to the Americans—began in modern-day Alabama (https://www.hhhistory.com/2021/01/the-trouble-tecumseh-stirred.html).

Many readers are surprised to learn that in the early 1800s, the Cherokee Indians had adopted many of the ways of the white settlers, including farming, weaving, European education, recording their language and starting a newspaper, and forms of government. This attempt to blend in and secure their land also extended to military endeavors. When the Tennessee militia—later joined by those in Georgia and Mississippi Territory—asked for allies against the Red Stick Creeks, the Cherokee Council responded by promising five to seven hundred men for a Cherokee Regiment that would fight under General Andrew Jackson.

Mistrust of their Cherokee counterparts ran through the militia. After all, the Cherokees had been enemies as recently as the late-1700s. And while the battles had cooled in the twenty years prior to 1813, the Cherokees had not sat idle. Young men were trained to split a coconut or a melon with a tomahawk at a range of thirty feet. They were also skilled knife fighters, archers, and even excellent shots with the older muskets to which they had access. Many were also former or present members of the mounted Cherokee Lighthorse Brigade.

What was the Cherokee Lighthorse?

In 1797, with the encouragement of U.S. Indian agents, the Cherokee Council created the first Lighthorse force, marking a move from leadership by charismatic war chiefs toward an Americanized, paramilitary structure. The name was taken from the rapid cavalry movements of “Lighthorse” Harry Lee during the Revolutionary War. The organization allowed a place for young Cherokee men to achieve esteem during a time when war no longer offered a passage to adulthood. Indian Agent Benjamin Harrison pledged to any who served honorably a rifle engraved with that man's name. Six Regulators, including a captain and a lieutenant, rode in each company.

Cherokee Chief The Ridge encouraged the end of the tribe’s blood laws, where a murderer’s fate was up to the victim’s family. If the murderer fled, a member of his family could be killed in his stead. Agreeing, in 1808, the Cherokee Council adopted the Nation’s first set of written laws based on the U.S. Constitution. Soon thereafter, they outlawed blood revenge and passed an act appointing “Regulators” (called “Lighthorsemen” by the 1820s) to suppress horse stealing and robbery, to protect widows and orphans, and to kill any person accused of resisting their authority. Eventually, they dealt with other crimes such as cattle-rustling, adultery, rape, and murder. Ridge and his recruits rode between villages mediating disputes and arresting criminals, tasks once performed by Indian agents. Whippings were a common form of punishment. The criminals were turned over to tribal courts for trial and sentencing. The troop also curbed the influx of any unruly white settlers into Cherokee Territory.
**For more information, Toward the Setting Sun by Brian Hicks and “Souls in the Treetops: Cherokee War, Masculinity, and Community, 1760-1820,” a dissertation by Susan Marie Abram.**