When the hero confronts the unlikely villain, she gives him a choice—come quietly or the heroine, a woman he has come to love during their FBI investigation, will die.

Now I, as the creator of this story, needed to make a decision. Where will the villain, a petite 48-year-old known as the “Doll Woman,” hide the tall, athletic hero?

You’ll have to read The Cryptographer’s Dilemma to find out what happens. But I am going to tell you where it happens.

The Doll Woman, whose name is Velvalee Dickinson, was arrested by the FBI for her espionage activities on behalf of the Japanese during World War II. I’ve written a couple of recent posts about her: The Doll Woman ~ A World War II Traitor and World War II's "Number One Woman Spy.”

Velvalee seems to have had two passions: 1) her reputation as an expert on dolls which she both collected and sold from her shop on Madison Avenue in New York City, and 2) an obsession with Japanese culture dating back to her young adulthood in California.

The confrontation between our fictional hero, FBI agent Phillip Clayton, and Velvalee takes place outside Seattle’s train station. Knowing about Velvalee’s love for the Japanese, I was thrilled to find that an emigrant from Shikohu, Japan named Fujitaro Kubota had established a garden on five acres of Rainier Beach swampland he purchased in 1927.

In the next three years, he added twenty-five more acres to his initial purchase. The Kubota Garden was more than a lovely place to spend an afternoon. The Japanese community in Seattle considered it to be a cultural center. Fujitaro Kubota’s home, office, and nursery were also located on the grounds.

Sadly, the Kubota family, like many other Japanese, were interned during the war. They were assigned to live at Camp Minidoka in Idaho. During this time, Fujitaro helped to build a community park and a Japanese rock garden in the camp.

After the war, the Kubota family returned to Seattle. Fujitaro’s two sons, Tak and Tom, helped their father rebuild the neglected gardens and nursery business.

In 1972, Fujitaro was awarded the Fifth Class Order of the Sacred Treasure by the Japanese government “for his achievements in his adopted country, for introducing and building respect for Japanese Gardening in this area” (Wikipedia). He died in 1973, but his legacy lives on in his historic garden.

The Seattle Landmarks Preservation Board declared the original acreage as a City of Seattle historical landmark in 1981 then purchased the entire garden from the Kubota family in 1987.

Two years later, in 1989, the Kubota Garden Foundation was established to preserve Fujitaro Kubota’s spirit and vision. Over the years, more acreage has been added.

Another feature is the beautiful Heart Bridge that crosses Mapes Creek.

The Stroll Garden was opened in the year 2000 and honors Fujitaro’s son, Tom.

We know that the real Velvalee Dickinson spent time in Seattle. With her love of Japanese culture, she no doubt was familiar with the Kubota Garden and perhaps even knew members of the Kubota family. The abandoned garden would be the perfect place for her to hide with her hostage.

A quick excerpt about the garden from The Cryptographer's Dilemma:

Velvalee's brooding anger sharpened with heartache as she and Phillip walked beneath the wooden entrance, which had been stripped of its iron gates. Though many of the gorgeous flowering shrubs and ornamental trees that had brought Velvalee such delight on past visits were thriving, vining weeds overran the border plants and rock gardens. Such a travesty and for no purpose….The water lilies in the narrow stream gathered against the bridge’s column, and thick algae bordered the bank. The odor of dead fish and rotting decay assaulted her nostrils.

“This place was a labor of love for a most distinguished gentleman named Fujitaro Kubota. He and his family lived here, worked here, entertained here.” Velvalee momentarily closed her eyes, letting herself return to happier days when she visited this garden refuge. “One could imagine herself in Japan while strolling these paths.”

“Why did you bring me here?” The impatience in Phillip’s tone caused her anger to flare. “Do you know where Fujitaro Kubota is now?...He’s in an internment camp. The man that created all this beauty, who gave us this generous gift, is now a prisoner. His only crime is his Japanese heritage.” She poked Phillip in the shoulder with the revolver. “That’s the government you work for.” 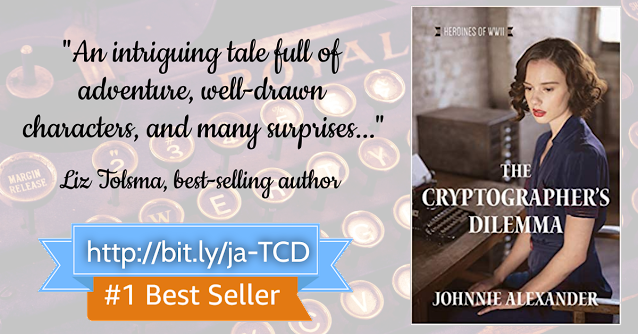 Johnnie Alexander imagines characters you'll want to meet and stories you won’t forget in multiple genres. A fan of classic movies, stacks of books, and road trips, she shares a life of quiet adventure with Griff, her happy-go-lucky collie, and Rugby, her raccoon-treeing papillon.
Purchase The Cryptographer's Dilemma at http://bit.ly/ja-TCD.