Last month, in the spirit of Christmas, we learned about some of the island traditions surrounding this special holiday on Chincoteague Island. If you missed that post, you can read it here. This month, I'm beginning a new series featuring facts and people who discovered and settled what is now southeastern Kentucky.

With all the past research I have on my personal family history, and since we have recently moved to Kentucky after 15 years living in Colorado, I needed a new focus as I work on the books coming from my previous research. I'm not sure what will come of what I discover this year, but I'll be keeping my readers informed on my FB Page and VIP  readers group.
You can also stay current on my "fictional" life as an author and receive industry news every 3 months by subscribing to my newsletter. Receive a FREE omitted chapter from my book, A Grand Design, just for subscribing! 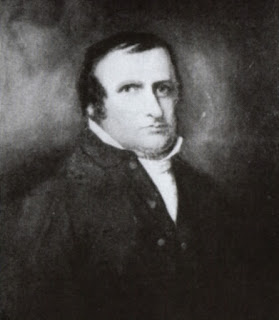 My family now lives in Whitley County in Kentucky, and as I was driving up the interstate, I saw signs for the William Whitley Historical House. That set me off on a rabbit trail of research looking up who this man was and why he was so important to the state, or commonwealth of Kentucky. I've only just begun to scratch the surface, but here is what I've learned so far.
William Whitley was born in Virginia, and his parents were immigrants from Ireland. Just before the onset of the Revolutionary War, Whitley suggested to his wife that they leave Virginia and move a little west across the Appalachians into the uncharted territory there. Following a scouting expedition, Whitley laid claim to a parcel of land and planted ten acres of corn as proof of ownership. Unfortunately, the local Shawnee and Cherokee tribes weren't too happy with Colonial settlers encroaching on the land the British had promised would be theirs, and they responded with escalated hostility.
William was quite the adventurer, though, and he wasn't one to give up easily. Although he and the other family who scouted with him sought safety inside a nearby fort, Whitley continued to fight for his land. He spent a little time after the Revolutionary War in the Northwest Territory fighting Indians, but when he returned, he again set forth with building his home. 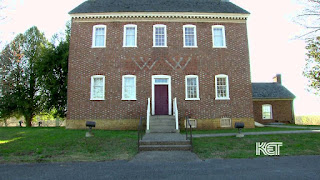 There are a lot of amazing features about the home William built. It was the first brick home west of the Allegheny Mountains, built somewhere between 1787 and 1794. The brick he used was two feet thick!  He did that to help protect his family from Indian attack. He also put the windows high above the ground so attackers couldn't shoot straight through at him, and he didn't have a porch or patio or anywhere around the home where attackers could hide. Rather ingenious of him, I'd say.
One feature I found endearing is that in addition to his own lighter bricks bearing his WW initials, he also had brick initials of EW placed in honor of his wife, Esther, to the rear of the house. He might be a famed Indian hunter, but his wife was known for being a sharpshooter herself. Guess they made quite the pair together! 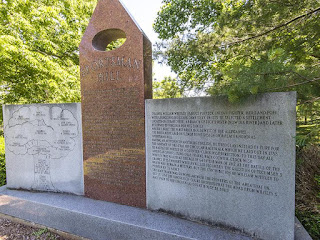 Although he called his home "Sportsman Hill," friends and area residents considered it the "Guardian of Wilderness Road," so it also holds that name. It actually became a popular meeting and gathering place for other Kentucky settlers like George Rogers Clark and Daniel Boone.
Whitley County and its county seat of Williamsburg were both named after William Whitley. One of his grandsons was William L. Sublette, a fur trader who became co-owner of the Rocky Mountain Fur Company with Jedediah Smith. There's even Whitley City named after Colonel Whitley. 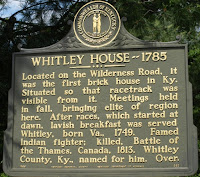 Another fun fact is how important William Whitley was to the establishment of horse racing in the United States. He was an avid fan of the sport, but he didn't care much for how the British designed their tracks. So, he built a track out of clay instead of turf, and he designed the track to be raced in counter-clockwise fashion instead of clockwise as it's done in England. It's why Kentucky is now world-famous for its horse-racing venue and is an integral location for the sport.
My daughter has been bitten by the horse-loving gene that flows down from my mother's side of the family, so we've already made plans to attend the Kentucky Derby and check out the various breeding farms and racing venues throughout the state, as well as the Derby Museum. She even wants to attend a summer horse camp, but we'll have to see about that. *grins*
NOW IT'S YOUR TURN:

* Have you researched anything about the area where YOU live? Are there any interesting facts or people from history who were pioneers in your area?

Leave answers to these questions or any comments you  might have on this post in the box below. Come back on the 9th of February to learn more about Daniel Boone and his trek across the Cumberland Gap.