3 Bizarre Jobs for Women in History

In honor of Women’s History Month, I thought we could explore three of the most bizarre jobs assigned to women in history. While many odd jobs still exist today, these are most likely positions you’ve never heard of and no longer exist in today’s world. Which is a good thing, believe me.

Most of us have probably heard of the fascination that 19th century medicine had with bloodletting and leeches, but did you ever think about the people who had to collect the critters? This was a difficult job, and not one that paid well. Thence, it was those who could not easily find work and were the poorest who would be employed in this occupation, which means it was one of the few occupations women could obtain.
There is only one species of leech in Britain that can suck human blood. The method for collecting these leeches was to go into leech infested water and get them to attach to a victim, get full of blood, and then pull them off and put them in a leech collecting container. Sometimes the leech collectors used old horses or some animal as the bait...but most times they used their own legs. The leeches would suck on them for twenty minutes or more, and the wound would continue to bleed for ten hours after they took the leech off. Obviously, there are many ill effects to being repeatedly subjected to leeches. The loss of blood being the worst.

Thankfully, this is an occupation that no longer exists, due to the decline in demand for leeches. The leeches are glad too, since they were nearly extinct by the time the bloodletting craze ended.

Have you ever heard the story of the Little Match Girl? In that tragic story, the little girl was merely selling matches. But these match girls were the ones who dipped the tips into the white phosphorus chemical to make them light. This was a tremendously dangerous job, some of the dangers not known until it was too late.
The process of making the matches consisted of dipping frames of matchsticks into various chemicals, including sulphur, white phosphorus and antimony sulphide. Each frame held approximately four thousand matches. An experienced worker could create ten million matches in a day.
The conditions for these workers, most often young girls, were so horrible, that it caused the Match Girls’ Strike of 1888 in London. The strike was an attempt to bring public attention to phosphorus poisoning. But the owners of the matchmaking companies were politically active and strong, so it was difficult to stand against them. In the end, the match girls gained a victory, with the owners conceding to the terms of abolishing penalties that were deducted from wages, allowing the workers to eat lunch in another room so that the food would not be contaminated with the white phosphorus, and allowing complaints to bypass foremen and be taken straight to management.
If you'd like more information on the strike, there is a detailed article on Wikipedia, which is very interesting and worth the read.
The thing that makes this one of the most bizarre jobs, is the effects that the phosphorus poisoning caused. One of the effects was what is known as “Phossy Jaw” which, in severe cases, causes a person’s jaw to glow in the dark. It starts out with flu-like symptoms and toothaches, but it leads to tooth loss, recurrent abscesses, and death of bone cells. After three to six months, the death of the bone cells in the jaw led to the dead bone separating from the live bone. If the affected bones were not removed, the victim of the disease would die of organ failure.
The Salvation Army opened a matchmaking factory in 1891 which used red phosphorus, which is less toxic. Today, machines have replaced this dangerous job, and can produce approximately two million matches per hour. 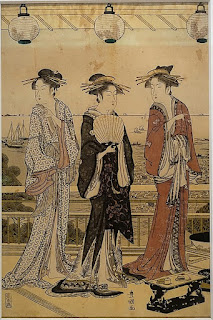 Heoibikuni was an occupation for Japanese women during the Edo period. The position was basically a servant to young Japanese noble women. It was their job to escort them on excursions as well, serving as a bit of a chaperone. She was basically a hairdresser, wardrobe coordinator and personal assistant.
However, the bizarre part of this job is that a deliberate part of this occupation was that if, or when, the noblewoman passed gas in public, the Heoibikuni were expected to vocally speak up and claim it as their own. This way the noblewoman's reputation of grace and honor was not tainted. You see, in Japanese culture, farting is regarded as a social blunder. It's such a big deal, that even today there are guide books that ask tourists not to burp or fart in public to avoid causing offense while in Japan.
But, if you don't mind some public humiliation, this occupation may not be so bad.
Of these, which one do you think was the worst? What is the worst job you've ever had to perform?
*****