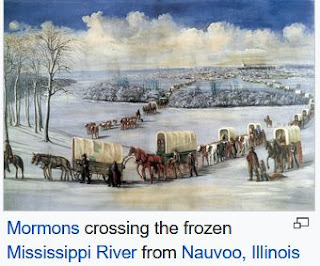 When we hear the words Covered Wagon, we likely envision a long train of wagons with white canvas covers pulled by four prancing horses, while the parents sat side by side facing forward, and the children skipped alongside or rested in the wagon bed.

However, the reality of traveling west included long, hot days; cold, stormy nights; raging rivers overflowing their banks; miles of desert with no sign of water; discarded belongings along the trail; and five months of walking more than 2,000 miles, hoping to find something better than they left behind.

The majority of wagons were made from ordinary farm wagons, with bent metal or wooden hoops from which to hang the canvas covering. Often this cover was patched together from various sources, or perhaps wasn’t even canvas—flour sacks, saddle blankets, and bedding might be used in a pinch.

These wagons needed to be strong enough to carry the people, their goods, and supplies for the trip, without wearing out the team hauling it. Many overloaded their wagons, and found themselves forced to discard family heirlooms which impeded their progress when the wagon sank to its hubs in mud.

The use of metal was kept to a minimum, since iron and other heavy metals were all that was available. Tires were rimmed so they wouldn’t wear out, and moving joints, such as axles and hounds—which connected axles to axle assemblies and the tongue. 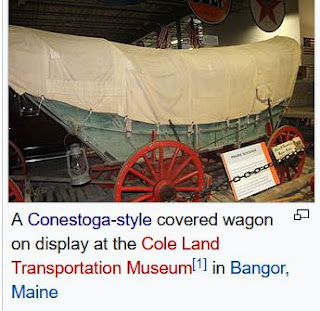 An icon of the Westward Expansion folklore is the Conestoga Wagon. With its raised floor bed, bow-shaped front, and 12,000 pound capacity, however, the Conestoga was too heavy for most of the trails heading west. Instead, this gargantuan vessel—which garnered the name of Prairie Schooner that was soon applied to all covered wagons—was better suited for the undeveloped roads of the colonial East, falling out of favor due to the arrive of the railroad, by the 1870s. However, some headed west later on, mostly used as cargo wagons that traveled the better developed trails between cities, hauling cargo and supplies. Conestoga wagons originated in Germany, and were thought to have been introduced to German settlers to haul cargo to Philadelphia around 1718. While there was a pull-out board called the lazy board where a teamster could rest if needed, usually he walked alongside.

Most often oxen were used as the draft animals hauling the wagons. They were cheaper, more reliable, and almost as fast as horses or mules. Horses had less stamina and more physical problems, particularly where fresh grass and water were in short supply, and mules—well, the saying stubborn as a mule isn’t an exaggeration.

While a covered wagon averaged about 40 square feet, additional storage was established by framing in empty spaces, such as under the driver’s seat for tools, brackets or hooks to hold water barrels, a feed box hung on the tailgate, and a bucket containing tallow or grease hanging from a nail on the rear axle to keep the joints lubricated.

You can watch a video I took of crossing a river in a covered wagon here: https://www.youtube.com/watch?v=o3xfD10YWQo

Question: What would be something you couldn’t possibly leave behind on your journey westward? Please disguise your email address so I can contact you should you win. Name AT carrier DOT extension. For example, donna AT Livebytheword DOT com

I will draw from all responses for a print (US only) or ebook copy of Calli, my latest Prairie Roses Collection release. You can learn more about Calli and the rest of the series at: https://www.amazon.com/dp/B07R8DSMB4

https://oregontrailcenter.org/the-wagon
Posted by Donna Schlachter at 3:00 AM