WEDDING GOWNS FROM THE SKY: Even War Can’t Stop Love

By Mary Davis
WWII and post-WWII brides had to be resourceful if they wanted a special dress for their wedding day because of rationing and shortages. Fabrics of any kind were designated as military and war essential—especially silk. This luxury fabric had it all—strong, lightweight, fire resistant, and easy to pack. Perfect for parachutes. But that meant those on the home front went without. So what was a bride to do for her special day? Use whatever was available. Some wore their Sunday-best dress, others borrowed someone else’s wedding dress, or they refashioned a family member’s outdated one. Orrrrrr . . .

While returning from a bombing raid over Japan in August of 1944, B-29 pilot Maj Claude Hensinger and his crew were forced to bail out when their aircraft caught fire. After it saved his life, Claude used his parachute as a pillow and blanket until he was rescued. When he returned to the States, he used his life-saving parachute in lieu of a ring to propose to Ruth, asking her to make her wedding dress out of it. Claude and Ruth wed on July 19, 1947. The couple’s daughter as well as their son’s bride wore this dress before it was donated to the Smithsonian.

On November 15, 1945, Rosalie Hierholzer walked down the aisle in a wedding gown fashioned out of her sweetheart’s bullet-hole riddled parachute. While flying over Germany, radio operator Temple Leslie Bourland and his crew had to bail out when their aircraft was hit by enemy fire. As Bourland floated toward the ground, he was shot in the hip, and his parachute received several bullet holes. When Bourland showed his fiancee his war mementos, Rosalie’s aunt offered to make her niece’s wedding gown from the silk, bullet holes included. With up to forty yards, there was plenty.

Reo Arland Casper, a native of Idaho, enlisted in the US Marines at age nineteen. Janet Gleason of Massachusetts signed up for the Navy WAVES (Women Accepted Volunteer Emergency Service) at age twenty-one. Their paths crossed at Fort Dix in New Jersey, where they struck up a friendship that evolved into a romance, and they fell in love. Janet packed Reo’s parachute for his final jump before graduation Paramarine training. Before he shipped out for his first duty, he proposed, and the pair planned to wed after the war was over. Knowing she couldn’t afford a wedding dress, Janet’s commanding officer gave her a Japanese silk parachute. With it, she fashioned the gown she would marry Reo in and packed it away until the end of the war. And the war did end, but Reo’s mother objected to the marriage because of religious differences. So, the couple went to Montana and eloped. They were married for fifty-eight years. You can learn more about Reo and his bride HERE as well as see Janet’s dress.

Here are a few others. 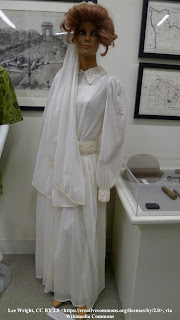 “Wedding dress made in Normandie, France in the summer of 1944 from fabric from a parachute. This wedding dress was made from a silk American reserve parachute. Fabric had been scarce under the German occupation and parachutes were much sought after items for their potential to make new clothes. Photo taken in 2015 showing items from the former International Museum of World War II in Natick, Massachusetts, a few miles west of Boston.” Lee Wright, Wikimedia.org

“Dress, bordeaux red, 1945 from the white parachute material from a Second World War, military parachute which has been painted; the upper part has small shiny pearls. Photographed in the collection of the National Liberation Museum 1944-1945, the Netherlands, archive number 3.2.53.” KingaNBM, Wikimedia.org
My guess is this one was either never worn as a “wedding dress” or after the wedding it was dyed red to get more use out of it. No wasting good fabric.
I love stumbling across little gems like this while researching. For my WWII novel, Mrs. Witherspoon Goes To War, I needed to know a thing or two about parachutes: the type, weight, steering capability, and such, when a wedding dress made from a parachute popped up. That’s way cool! I wanted to know more, and I WANTED to use it, but sadly, it wouldn’t fit into my story. Perhaps, someday I’ll have the perfect story to include this wonderful bit of history in.