Please Do Not Adjust Your Set: The History of Television

At my age, it feels bizarrely insulting to put “history” and “television” in the same sentence.

I remember the first television my parents ever owned—a large cube encased in light blond wood with the name “Zenith” displayed on the front. It stood precariously on four long, black legs that screwed onto the bottom. The main reason I recall those long legs is because my big brothers convinced me that if they lay on their backs underneath the television, they could see under the square dancers’ skirts when we watched Don Messer’s Jubilee on CBC television. You can watch this next-level entertainment for yourself, HERE.


These wonders were brought to us over the airwaves, captured by the big antenna on our roof. Every time the picture went wonky—usually in the middle of The Ed Sullivan show—we chalked it up to our neighbor shaving with his electric shaver, a theory still unproven. To this day, however, if your TV isn’t cooperating, “Eddie must be shaving” is the standard line in my family. CBC was our main channel. The other was the French version of the same. Our family did not speak French. Once in a while, if the weather graced us, we could get a third channel. All were snowy. All were, of course, in black and white.

When my parents purchased a color TV set, I figured we were the richest people in town. It’s no coincidence that, as a preschooler, I was in love with Little Joe Cartwright of Bonanza and when I matured, I switched my affections to Pa Ingalls on Little House on the Prairie. One of my friends had a Barbie doll who had her own little portable plastic TV for her Barbie-sized bedroom, causing me no end of covetousness.
Who remembers when television stations signed off for the day, leaving only a test pattern? I thought this one was unique to CBC until I did my research. The Indian-head test pattern was created by RCA and was introduced in 1939. It was designed to test different aspects of broadcast display and was widely adopted by stations across North America.
Would you believe me if I told you that television’s roots may go back as late as the 18th century? All mechanical, of course. By “roots,” I mean a primitive facsimile machine introduced by Scottish inventor Alexander Bain in the 1840s. It was further developed by English physicist Frederick Bakewell in the 1850s. By 1856, the first practical facsimile system worked on telegraph lines. It was developed by an Italian priest named Giovanni Caselli.

By the time the radio became a household item (I wrote about radio’s history last month, HERE), it wasn’t too difficult for people to imagine being able to see what they were listening to. Though a long list of names and dates appear in any worthwhile history of television, the TV as we know it is mostly credited to Philo Taylor Farnsworth, a 21-year-old American inventor who successfully demonstrated the first electronic television in San Francisco on September 7, 1927. Farnsworth must have been quite the crackerjack since he did not have electricity in his own home until he was 14 years old. I love the story about how his first transmitted image was a simple straight line. When an investor asked, “When are we going to see some dollars in this thing, Farnsworth?” he pointed his primitive camera at a dollar sign instead.

In 1939, Franklin Delano Roosevelt became the first president to appear on television when RCA televised the opening of the World’s Fair from New York. RCA began selling television sets with 5 by 12-inch picture tubes. On May 17, 1939, a baseball game was televised for the first time, between Princeton and Columbia universities. All the action had to be captured by a single camera.

When the first dramas began to appear on television, actors were forced to work under impossibly hot lights, wearing black lipstick and green makeup to accommodate the limitations of early cameras. 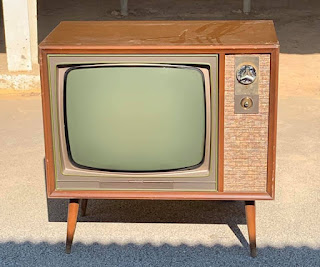 World War II disrupted the development of television. By this time, however, people were used to seeing “talkies” (movies with sound) and newsreels at the theater. Bringing moving pictures into homes began to seem more feasible using all-electronic methods of scanning and displaying images. After the war ended, TV broadcasting expanded swiftly and became the important medium for mass advertising, news, and entertainment that we know today.

If I had to explain to my teenage self what television would look like in 2022, I wouldn’t know where to begin. Flat screens. Big screens. Internet subscriptions. A thousand channels. Live streaming. Watching an uninterrupted show any time you want, 24 hours a day. Pausing it when you want. Binge-watching an entire series. Watching it on my phone. Say, what?

While the evolving technology is amazing, don’t get me started on the DE-volving of discretion in what’s shown today. It seems anything goes. But that’s a topic for another day.

Terrie Todd is the award-winning author of The Silver Suitcase, Maggie’s War, Bleak Landing Rose Among Thornes, and The Last Piece. Her next novel, From the Ashes, will release later in 2022. Terrie is represented by Mary DeMuth of Books & Such Literary Agency. She lives with her husband, Jon, in Portage la Prairie, Manitoba, Canada where they raised their three children. They are grandparents to five boys.

From soup explosions to fearsome medical procedures, from the stories behindour favorite Christmas carols to meeting a first grandchild, Terrie Todd’s popular “Faith and Humor” column has been encouraging and amusing readers of The Graphic Leader for ten years. This book celebrates a decade of wit and wisdom found in Terrie’s hand-picked favorites. Arranged by category, Out of My Mind could be called a weirdly out-of-order memoir of a life in which faith and humor dwell hand in hand. Categories include: Faith, Marriage & Family, The Writing Life, Health & Fitness, Easter, Mother’s & Father’s Day, Thanksgiving, Remembrance Day, Christmas. Out of My Mind makes a great gift for any occasion.
Posted by Terrie Todd at 1:30 AM