When Sky and the Earth Wreak Havoc 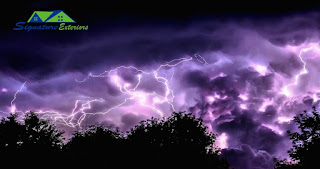 I've been through many storms from hurricanes to tornadoes to floods, and they have always fascinated me and had me thinking about the results left behind. Our country has seen many natural disasters caused by what insurers call "An Act of God."

When a weather pattern forms circles with a low-pressure center, whether rotating clockwise or counterclockwise, it is technically known as a cyclone. This includes hurricanes and tornadoes as well as larger systems such as a middle-latitude cyclones. Hurricanes and typhoons are two names for the same type of storm--a strong tropical cyclone. The names are interchanged in various areas of the world. Today, we look at some of the greatest ones in history before 1950.

Several years ago I did an entire blog on the Galveston hurricane that devastated the island and caused hundreds of death. It happened before hurricanes had names and is simply known as the Galveston Hurricane of 1900. It hit shore and became the deadliest storm to hit on American soil in history with 140 MPH winds and fifteen foot waves. Estimates of deaths ranged between 8,000 and 10,000 people killed. Even a year later, bodies were found washed ashore. 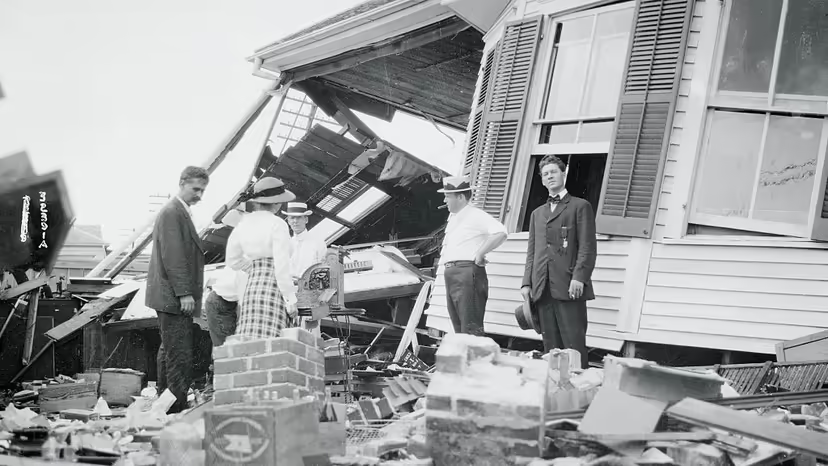 Since then, hurricanes have hit the Gulf and Atlantic coast lines from deep South Texas to both coasts of Florida and up the Atlantic coast on up to Canada. Meteorologists refer to hurricanes as the most deadly storms to hit land. Because of the length of time they take to move through an area and how long they can last, death tolls and destruction runs high.

Most of us remember the more recent ones from Carla, to Camille, to Katrina, Rita, Ike, Sandy, Andrew to name a few. The damage from a hurricane can be as devastating today as it was over a one hundred years ago. Now, the National Weather Service can be much more accurate in their predictions of where the storms will make landfall, how large they are and how fast the winds are.

Most of remember the tornado featured in The Wizard of Oz. That fictional storm took place in Kansas. In reality, Kansas, Missouri, Oklahoma and other mid-west plains states are in the heart of tornado country and what has been called "Tornado Alley." 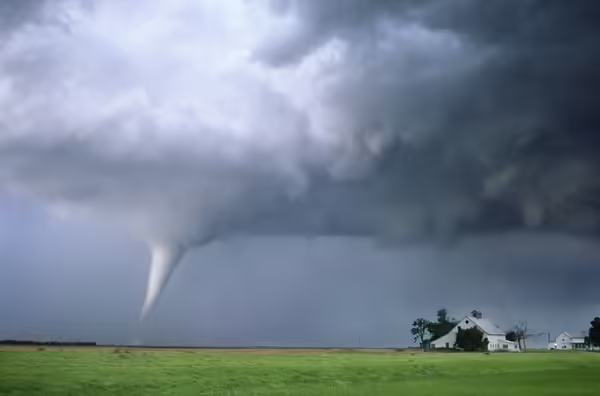 Of all the destructive power of storms, none have the ferocity and form of tornadoes. They come down like a sword from the sky and lash out at their surroundings as though with malicious and mindful intent to destroy. These columns can reach speeds of over 300 mph and measure from a mile to many miles across. They scar the earth and destroy homes and buildings in brief moments of twisting and turning in their fury.
They year 1925 saw such a storm rage across the mid-west bringing destruction to towns across three states from Missouri to Illinois and into Indiana. The 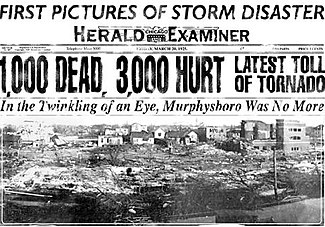 distance was 219 miles and the tornado traveled it in about three and half hours. Because of the straight path for 183 miles, scientists believe it might have been a family of tornados spawned by a massive supercell storm. It is one of the deadliest and most destructive tornadoes to hit the mid-west states.
In March of1888, a hurricane on the Atlantic coast came ashore as a blizzard that devastated states along the upper coast. Known as the Great White Hurricane, it immobilized cities such as New York with the amount of snow that fell. It paralyzed the East Coast from the Chesapeake Bay to Maine and on up to the Canadian Atlantic coast cities. 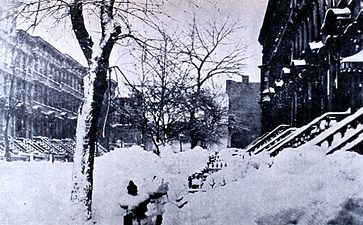 Brooklyn, New York in March, 1888
The snow piled high in the streets and kept people indoors for several days. Damage to spring crops like the apple trees in Connecticut ran high, and loss of life. Property damage ran to more than $20 million and 400 lives were lost, include 100 sailors across the east coast.
Other natural disasters which took hundreds of lives and caused millions in property damage include the great earthquake in San Francisco. 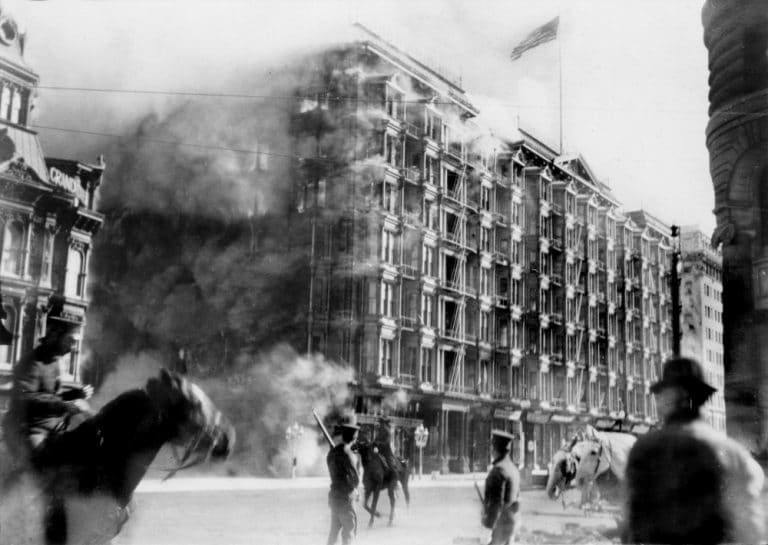 This massive earthquake occurred the morning of April 8, 1906 and took the lives of 3,4400 people and destroyed close to 80% of the city. The quake lasted only a minute, but firefighters spent four days putting out fires. Thousands were left homeless and lived in tents.
The Johnstown Flood is also listed with the top natural disasters and was the first one attended to by the American Red Cross. It became crucial in the history of natural disasters because of the lack of disaster and crisis management. A combination of heavy rain and a dam break sent 20 million gallons of water into the Mississippi River. This surge of water created a 70 foot high wave of water that traveled over fourteen miles on May 31, 1889. It destroyed everything and everyone in its path. 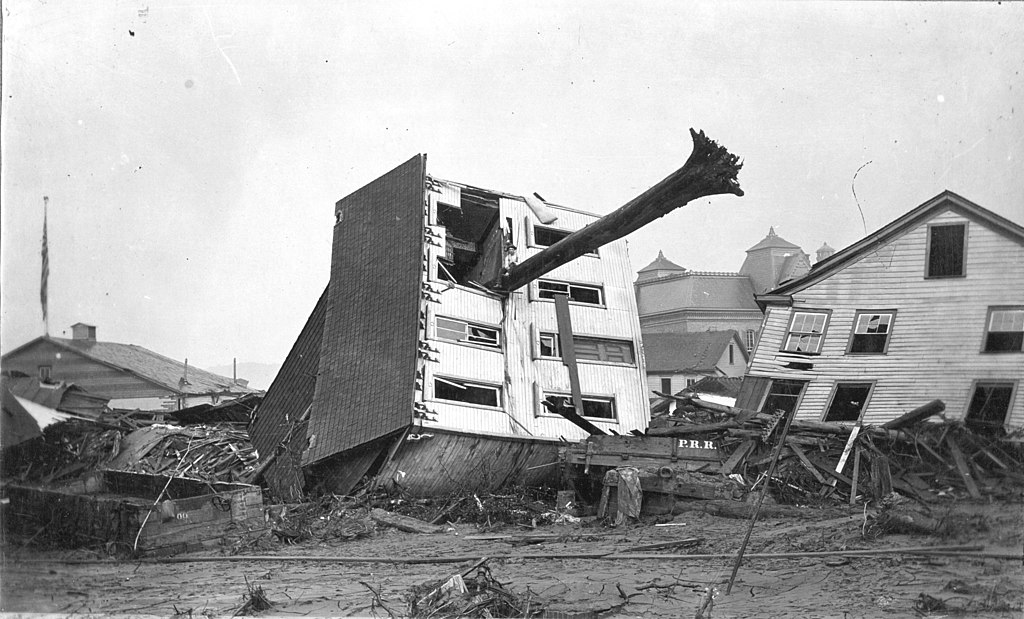 This is the John Schultz home in Johnstown. As it floated away down the street, a tree skewered it. Miraculously, the six people inside the home survived.
Tsunamis, volcano eruptions, typhoons are other acts of nature that wreak havoc over the land and sea. We can be thankful today for the Natural Weather Service which can warn us of such storms and disasters and allow us to find shelter and safety.
I have featured storms in several of my books. The Great White Blizzard is featured in my book Summer Dream. Have you ever been through a strorm that left behind destruction and/or death? Comment below and leave your email address for a chance at a free copy of this book.

Rachel Winston is the daughter of a minister in Briar Ridge, Connecticut. 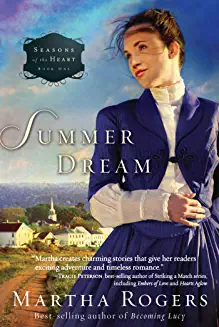 When a friend of her best friend's brother comes to visit, Rachel is attracted to him, but Nathan Reed wants nothing to do with a Christian, much less the daughter of a minister because of tragedy in his own family that caused him to turn from God.

After he is caught in a blizzard and nearly dies, the ministries of Rachel and her mother show him the true meaning of God's love. Now he must make amends with his family for his past and pray that Rachel will wait for him.

Martha Rogers is a multi-published author and writes a weekly devotional for ACFW. Martha and her husband Rex live in Houston, Texas where they are active members of First Baptist Church. They are the parents of three sons and grandparents to eleven grandchildren and great-grandparents to six. Martha is a retired teacher with twenty-eight years teaching Home Economics and English at the secondary level and eight years teaching Freshman English at the college level. She is a member of ACFW, ACFW WOTS chapter in Houston, and serves as President of the writers’ group, Inspirational Writers Alive.
Posted by Martha W. Rogers at 2:30 AM