By: Rebecca May Davie

"Tumbling Waters" is a rough translation of the Cherokee word for Amicalola Falls. The Cherokee Nation cared for and roamed the land where this 729-foot waterfall with its seven cascades exists. The tallest waterfall in Georgia changed hands after the signing of the *New Echota Treaty of 1832 as the Land lottery ensued. 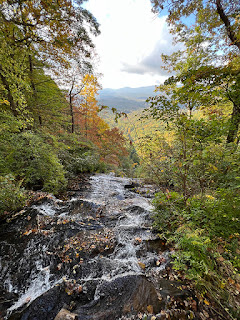 The first to write about this landmark was William Williamson who explored and searched for land of his own to claim in the lottery. He extolled both the beauty and the difficulty of ascent. At that time, he declared the falls “perhaps the greatest in the world, the most majestic scene.”
A hidden gem, Amicalola Falls was so remote that a member of the Cherokee Nation living nearby
evaded the Georgia Guard. In 1838 the Georgia Guard removed the Cherokee and forced them onto the Trail of Tears, yet she lived there undisturbed until the 1840s.
Later in 1852, Bartley Crane occupied the space at the base of the falls and ran a mill. He collected the falls and hundreds of surrounding acres. A Methodist-Episcopal campground began on his land at the base as well. This spot was used by both sides during the Civil War. After, John Crane, Bartley’s son, ran a general store through the Great Depression. In 1940, the State of Georgia bought Crane’s lands for a state park. 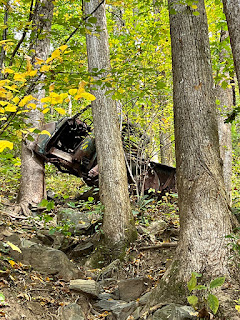 Today, there are 829 acres to explore. Stairs and roads offer opportunities to view the falls for people on foot or on wheels. There are trails for beginners and advanced hikers to traverse. The trails vary in flora, fauna, and a bit of memorabilia. Notice the photo at left with the old truck stuck in the trees. It must have plummeted from above with no way for recovery from the steep terrain.
Register at the visitor center before 2:00 pm to attempt the five miles up to the remote Hike Inn for a meal or to stay. The lodge at the top of the falls, accessible by car, also offers accommodation.
Amicalola offers an approach trail for the Appalachian Trail (AT). Hikers can make the eight-mile trek to the southern terminus at Springer Mountain. From that point they begin their northbound 2,190 mile journey to Mount Katahdin, Maine.
My favorite time to see Amicalola is in the fall. The changing and falling leaves add to the experience. Peaceful, awe-inspiring vistas inspire us to take a deep breath, slow down, and enjoy. If you haven’t seen this wonder in person, consider a trip today. Would you like to watch videos of the falls in action? Check out this reel on Instagram.
*Read more about New Echota in Denise Weimer's post New Echota Treaty 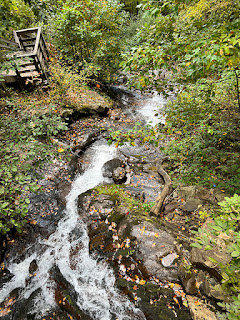 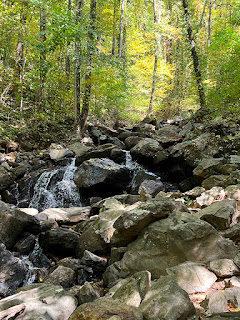 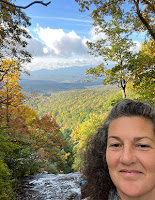 As a child, Rebecca loved to write. She nurtured this skill as an educator and later as an editor for an online magazine. Rebecca then joined the Cru Ministry - NBS2GO/Neighbor Bible Studies 2GO, at its inception. She serves as the YouVersion Content Creator, with over 75 Plans on the Bible.com app.
Rebecca lives in the mountains with her husband, the youngest of their two sons, and a rescued dog named Ranger. If it were up to her, she would be traveling - right now. As a member of ACFW, FHLCW, and Hope*Writers, Rebecca learns the craft of fiction while networking with a host of generous writers. She is working on her first fiction novel. This story unfolds from the 1830s in Northern Georgia.