Last month, I began a new series on Kentucky history and the pioneers who established the state. If you missed that post, you can read it here. This month, we're delving a bit more into Daniel Boone and his forays into the Kentucky frontier. 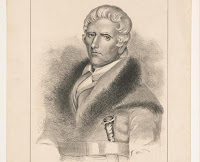 Kentucky was granted statehood in 1792, becoming the first U.S. state west of the Appalachian Mountains. I spent 25 years of my life in Delaware, the First State of U.S., so it's ironic I now live in another "first state." While the original thirteen colonies were engaging in small battles with England over governorship, taxes, political representation, and various freedoms, many residents of those colonies decided to strike out on their own and start exploring the frontier to the west. 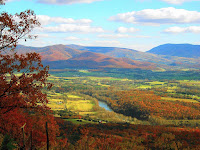 Frontiersman Daniel Boone was one of Kentucky’s most prominent explorers, and many immigrants followed the trail he blazed through the Cumberland Gap, known as the Wilderness Road. His story doesn't begin there, though. He was born in 1734 in a small township northwest of Philadelphia, and at age 15 left Pennsylvania with his family. They headed to the Shenandoah Valley of Virginia, but Daniel left not long after and settled along the Yadkin River near the western edge of North Carolina. 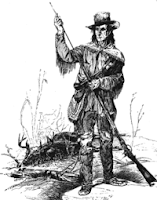 Instead of farming, Boone became a marker or long hunter and made his living selling deerskins from long hunting expeditions out in the wilderness. He was gone for months or years at a time with that trade. In 1755, while serving as a wagoner for General Braddock back in Pennsylvania, he met a trader who regaled him with stories of the abundant wildlife and financial opportunities west of the Appalachian Mountains. But that exploration was put on hold when Daniel married and started a family. He continued to hunt throughout the Carolinas and even down to what became Florida.
In early 1769, that trader (John Findley) found Daniel again and relit the spark in Boone's wanderlust nature. He spent the next four years exploring that wilderness area, and in 1773 began escorting settlers with the intention of permanently settling Kentucky. In 1775, a judge enlisted Boone's help to negotiate with Cherokee tribes and purchase their claims, then he cut a path through southwestern Virginia and northeastern Tennessee that would become the Cumberland Gap Road.

Despite ownership of the land, the settlement of Kentucky was fraught with a great deal of conflict, as England secured the support of the natives to attack settlers during and even after the Revolutionary War. Many were captured and forced to live among the Cherokee or Shawnee. Boone was one of them, although he only lived among the Shawnee for a few months before escaping. His daughter had been captured the year before, but immediately rescued by Boone and his men. That story was eventually immortalized by James Fennimore Cooper in The Last of the Mohicans.

For the next seven or eight years, raids continued and casualties increased. So many battles, and so many deaths among the British, the American settlers, and the natives, all over who would ultimately own the land. By 1787, the British were completely run out and in 1792, statehood was granted. Nearly thirty years of exploration, settlement, and defense had ultimately produced a new state for the U.S., and Daniel Boone became immortalized in American history.
NOW IT'S YOUR TURN:

* Have you ever left your family to move or settle in a completely different region?

* What famous settlers or pioneers are known where you live?

Leave answers to these questions or any comments you might have on this post in the box below. Come back on the 9th of March to learn some fun facts pertaining to Kentucky.
For those interested in my "fictional" life as an author and industry news about other authors, subscribe to my newsletter. Receive a FREE omitted chapter from my book, A Grand Design, just for subscribing!

Tiffany Amber Stockton has been crafting and embellishing stories since childhood, when she was accused of having a very active imagination and cited with talking entirely too much. Today, she has honed those skills to become an award-winning, best-selling author and speaker who is also an advocate for literacy as an educational consultant with Usborne Books. She loves to share life-changing products and ideas with others to help improve their lives in a variety of ways.
She lives with her husband and fellow author, Stuart Vaughn Stockton, along with their two children and two cats in Kentucky. She has sold twenty-four (24) books so far and is represented by Tamela Murray of the Steve Laube Agency. You can find her on Facebook and GoodReads.
Posted by Tiffany Amber Stockton at 1:00 AM